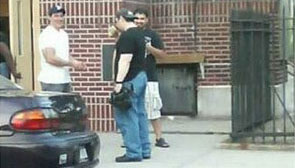 Last week, Jen Phillips discussed five ways to respond to jokes about rape. She chose option #5, wherein you disarm the joke-teller by pointing out just how un-funny these jokes are by reversing the target of the joke. Below, a few options for dealing with that ubiquitous troll of the city sidewalk—the catcaller:

1. Ignore it and keep walking.

2. Use non-verbal cues (involving the middle finger) to indicate your disgust.

3. Attempt to educate harasser through dialogue or a handy business card.

5. Organize a city-wide summit to address gender-based harrassment and assault in public spaces, complete with a gallery exhibition of photographs of area cat-callers caught in the act.

I tend to go with #1, since I prefer not to let the catcaller get the satisfaction of a reaction, though sometimes option #2 happens as a knee-jerk response. Unfortunately, directly responding to, and even ignoring, catcallers is not always a safe option. In April, a woman was left partially blind, and her friend suffered a fractured jaw, after telling someone to leave them alone in a NYC pizzeria. In March, a 29-year-old pregnant woman was run over and killed when she ignored a catcaller.

To bring attention to the prevalence of public harassment, a number of websites have been created under the title Hollaback. These sites offer a space for people who are the target of gender-based harassment to share their experience in specific cities, regions, and countries with a sympathetic community, while publicly shaming the perpetrators. You can also tweet sidewalk utterances to @catcalled so long as it’s under 140 characters. Which it probably is, since as any city-dweller knows, these are not eloquent treatises.

However, these sites are not just chronicles of the harassers that make your walk to work less than pleasant. HollabackDC seeks to make public not just catcallers, but all forms of street harrassment and misogyny:

“Gender based sexual harassment is any sexual harassment that occurs in a public space when one or more individuals (man or woman) accost another individual, based on their gender, as they go about their daily life. This can include vulgar remarks, heckling, insults, innuendo, stalking, leering, fondling, indecent exposure and other forms of  public humiliation. Gender based public sexual harassment occurs on a continuum starting with words, stalking, and unwanted touching which can lead to more violent crimes like rape, assault, and murder.”

That is why they are moving beyond the web and joining other DC-based community activists to stage a summit that will address strategies for responding to—and ending—street harassment. The summit’s opening reception will include a photography exhibit of street harassers in the act. If you live in DC and snap a catcaller in the act, you can submit your own photo.