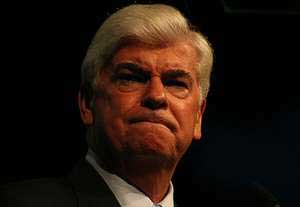 The Chris-Dodd-is-no-K-Street-pawn campaign is ramping up. I just received an email from Colleen Flanagan, communications director for the Connecticut Democratic Party. She’d seen my blog item commenting on today’s Roll Call story on the senator’s recent efforts to “distance himself from K Street” and wanted to direct my attention to a press release the party issued earlier today defending Dodd’s record.

It’s tough being a lobbyist in Washington these days, and Senator Chris Dodd isn’t making it any easier. Yet another story today in the DC press features unnamed lobbyists, who will speak only on the condition of anonymity, whining that they aren’t getting their way with the Banking Committee Chairman and Senator Kennedy’s top deputy on the Health, Education, Labor and Pensions (HELP) Committee.

The release goes on to list a series of quotes in which lobbyists whine that Dodd’s shutting them out and ends with a quote from Flanagan:

“It speaks volumes that these industry insiders aren’t willing to be named, yet they continue to peddle their stories to anyone who will listen, trying to gain sympathy and a leg up on these critical legislative measures. The only sympathy these unnamed sources deserve to get is that they sound so silly in article after article complaining that Main Street has Dodd’s ear and not K Street.”

In a separate email, Flanagan told me: “The point is that advocating on behalf of consumers is nothing new for Sen. Dodd, and the people who say otherwise are ignoring close to 30 years of his track record on these issues.”

As I noted earlier, Dodd has indeed been a champion of consumer causes. But his image problems are largely of his own making. And he’s placed himself in a position where it’s easy to call his motives into question. For years, he’s raised huge amounts of campaign cash from lobbyists and finance industry players. As Jonathan Stein and I detailed back in April, almost a third of Dodd’s first quarter receipts came from financial execs and interests, whose industry Dodd holds great sway over as Senate banking committee chairman. (That doesn’t take into count sizable contributions from K Streeters or the insurance or health care industries.)

Dodd’s campaign machine clearly sees an opportunity here to rehabilitate the public’s perception of the embattled senator. While publicly they are expressing outrage about lobbyists “peddling stories” about their lack of access to the senator, privately they must be thinking that any press that puts Dodd on the wrong side of K Street is just the type of PR they’re looking for. After all, without stories like that, there wouldn’t be ads like this: