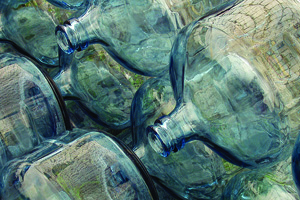 Residents of Bundanoon, New South Wales, Australia have voted to ban the sale of bottled water in their rural town—probably the first in the world to do so. Only two voters opposed the ban. Why?

Bundanoon’s battle against the bottle has been brewing for years, ever since a Sydney-based beverage company announced plans to build a water extraction plant in the town. Residents were furious over the prospect of an outsider taking their water, trucking it up to Sydney for processing and then selling it back to them. The town is still fighting the company’s proposal in court.

In other words, bottling water wastes an incredible amount of resources—natural and capital. (Producing the bottles for the American market requires 17 million barrels of oil; three liter of water are needed to produce a liter of bottled water.) So officials in Bundanoon will install more drinking fountains and encourage residents to use them to fill reusable water bottles for free.

I hope something like this catches on elsewhere. It’s certainly possible. When San Francisco announced it would ban businesses from giving out plastic bags for free, some store owners griped it would hurt their bottom lines because paper bags are more expensive than plastic. But walk in to any Trader Joe’s or Walgreens and you’ll see a majority customers bringing their own bags or reusing them from previous trips.

That’s the power of a collective mindset, albeit one driven in part by a law. Of course, there are other benefits to reusable bags, the least of which is not having to dedicate a cupboard to a heap of plastic stamped with CVS’s logo.

But there are more potent incentives to banning bottled water. For one, the environmental benefit is greater (Americans recycle less than seven percent of their plastic, compared to 55 percent of the paper they use.) To me, though, the most potent incentive is purely economic: Part of the reason we pay taxes is so that we have clean drinking water. Whenever I buy a bottle of water, I feel like I’m doing something incredibly irrational, spending money on something for which there exists a free and arguably better substitute—tap water.