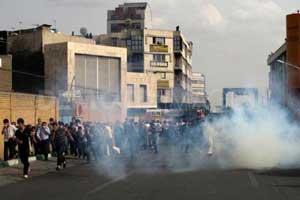 UPDATE: On Sunday morning, David Corn received this brief report from an American researcher in Tehran:

It’s so quiet here. It feels like a bad movie, as though everyone is pretending to ignore what happened yesterday. But I talked to this one pro-Mousavi supporter. He tells me that they plan to do more demos. I can’t get any news from here. The Internet is super slow. State TV is doing a fine job editing the current events into a “US” versus “Them” situation. I have never seen the capital city like this before. Many are just waiting to hear from Mousavi.

In a statement dated June 20, opposition leader Mir Hossein Mousvai condemnded the “lies and fraud” of the Iranian leadership. He declared his movement was now dedicated to the “historical mission” of “renewing the life of the nation.” He said that he has accepted the “burden of duty put on our shoulders by the destiny of generations and ages.” His aim: “to achieve a new type of political life” in Iran.

So people are waiting for Mousavi, and Mousavi has put out a strong statement essentially calling for resistance and regime change (but not overthrowing the Islamic republic). But with the autocrats controlling the media, will Mousavi’s message be effectively disseminated, and how will Iranians react to it?

UPDATE II: A graduate student in England with extensive contacts in Iran reports on Sunday that workers were helping protesters escape from police. He notes that in one instance a police commander aided protesters. He also shares an eyewitness account of at least six protesters dying at a hospital after being hit by rubber bullets and notes that people who have brought wounded protesters to hospitals have been arrested. His full report is posted in Mojo blog.

Iran was in chaos this weekend, as anti-government protesters defied a ban and rallied in major cities, including Shiraz and Tehran, the capital. Security forces struck back hard, dispersing crowds with tear gas, water cannons, and bullets. The New York Times‘ Lede blog, which has had excellent coverage of the demonstrations, reports that opposition leader and defeated presidential candidate Mir Hussein Mousavi spoke to the crowds and told them he was “ready for martyrdom,” calling for a national strike if he is arrested.

As Nick predicted this morning, the mounting violence has forced President Barack Obama to go further in his criticism of the Iranian regime. On Saturday afternoon, he called the government’s actions “violent and unjust,” and repeated what seems to be his favorite quote: “Martin Luther King once said, ‘the arc of the moral universe is long, but it bends toward justice.’ I believe that. The international community believes that. And right now, we are bearing witness to the Iranian peoples’ belief in that truth, and we will continue to bear witness.” (David Corn wondered earlier on Twitter if the word “unjust” in Obama’s statement could cover vote-rigging.)

Also bearing witness today is Tehran Bureau, which describes itself as “an independent online magazine about Iran and the Iranian diaspora.” That site is running this Twitter feed, describing developments as they happen. Here’s one of the photos it has posted: 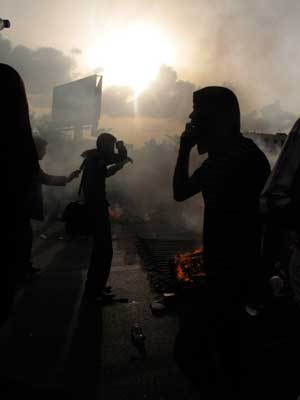 Meanwhile, David Corn relays this report from a “reliable witness” inside Iran:

…HAS HIT THE FAN…TOHID SQUARE ON FIRE, PEOPLE ARE CHANTING,
ALL ALONG SATTER KHAN STREET CHAOS, THEN SUDDENLY QUIET, PEOPLE EATING ICE CREAM, ETC., THEN MORE CHAOS, ROCKS, FIRE IN THE MIDDLE OF THE STREETS, CHANTS CHANTS CHANTS AND IT IS NOT YET NIGHT…TEHRAN IS ON FIRE TONIGHT…

Our old colleague Laura Rozen is constantly updating a series of news links on Iran on The Cable, the blog she runs for Foreign Policy magazine. It includes on-the-scenes reporting from Tehran Bureau and other on-the-ground sources, as well as a roundup of reports from more traditional Western and local new sources, official statements, and the like.

There are also clandestine videos being released on YouTube and elsewhere, most of them shot on cell phones, showing the beating, tear gassing, and shooting of protestors. This one, sent to us by an Iranian reporter, reportedly shows how the Ahmadinejad regime prepared stacks of fradulent ballots before the election even began.

The Obama administration is under pressure—mostly from the right—to make a more aggressive response to the situation in Iran. But explicit US government support for the protestors—or for Ahmadinejad’s rival Mir Hussein Mussavi–could be tantamount to the kiss of death. As Karim Sadjadpour, an Iranian expert at the Carnegie Endowment for International Peace, told the New York Times: “If we overtly take sides, the regime could well react with a massive and bloody crackdown on the demonstrators using the pretext that they are acting against an American-led coup.”

At least one Iran watcher in Washington has a dark view of what lies ahead. Daniel Brumberg, acting director of the Muslim World Initiative of the US Institute of Peace, tells Mother Jones:

The regime seems to have an effective plan for quelling the protests. I think they will prevent any major mobiization inthe streets. All Khatami allies, clerics and lay, will be purged, forced to confess on TV that they are agents of the US. Welcome to Stalinism with an Islamist flavor: Iran moves to dictatorship. Sorry to be so grim, but that is my guess.

Two things have been somewhat unremarkable, given my previously stated perspective: the harsh, ramped-up reaction of the security forces, Basij, etc. to further demonstrations in the wake of Khamenei’s sermon and the significant fall-off in opposition turnout on the streets given the increased danger.

Something less predictable was the stance adopted by Mousavi (and Karroubi, although that latter clearly is less critical). He now is seemingly more defiant–especially in response to pointed warnings from the Leader–than even Khatami ever appeared to be when the latter was president. This undoubtedly has been considerably inspiring to the opposition and remains a real problem for Khamenei, Ahmadinejad & Co.

The situation still remains somewhat unpredictable with ancedotal reports of hesitant or tolerant police [being] too sparse to cite in order to draw conclusions. Likewise, although clearly very belligerent and determined in certain encounters with security forces…demonstrators still seem somewhat scattered, with many others being berated by women especially for cowardly behavior in the face of even a non-lethal government response.

Something perhaps worth noting is that so many stayed off the streets, or behaved rather timidly, even though security forces in some instances either do not appear to be brandishing firearms or do not yet have orders to use them more liberally (perhaps because, as noted above, there really hasn’t been much of a coherent, more threatening challenge to them).

Tonight appears likely to be more interesting. Many potential protestors who held back during the light of day, noticed others were not being shot, and became more enraged over the situation. They could well emerge, swelling the numbers of those already on the streets.

At the moment, though, there is not enough information coming out of Iran–thanks to autocrats’ media clampdown–to know what the opposition will attempt and what awaits it.

Portions of this post also appears on Unsilent Generation, James Ridgeway’s blog on the politics of aging.