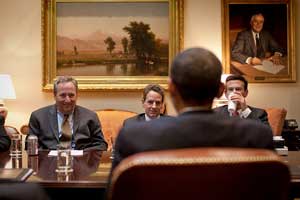 On Wednesday, President Barack Obama released his proposal (PDF) for regulating the Wild West market of financial instruments. The proposal includes several tough reforms, including the creation of a single national banking charter, the elimination of the weak Office of Thrift Supervision, and new consumer protection measures. But the administration’s plan for regulating derivatives, which include products like credit default swaps, which many believe contributed to the financial meltdown, has a loophole you could drive a truck through.

In theory, it should be easy for traders to get around the CCP clearing requirement, since there’s nothing to prevent lawyers from easily modifying “standardized” derivatives contracts to magically “customize” them. And the avoidable CCP requirement is itself less than some reform advocates wanted, as Josh Harkinson explained last week. Sen. Tom Harkin (D-Iowa) introduced legislation for all derivatives to be exchange traded. But the banks and other entities that own credit default swaps and other derivatives don’t want those products traded on an exchange.* The Big Money‘s Martha White explains:

[A]n exchange would create what the experts term “price discovery.” It would do for the derivatives market what e-commerce did for the retail landscape. If you wanted to buy a set of patio furniture in the pre-Google (GOOG) years, you would just go to the store and pay whatever the tag read. Now, with a few keywords and clicks, you can comparison shop among dozens of merchants.

What banks really want to avoid is mandatory exchange trading because they pocket the difference between the asking price and the offered price in an opaque market. This difference would still be present in exchange-traded products, but it would be much smaller because everyone would be able to see the going rate, so bid amounts would be much closer to sellers’ asking prices.

In other words, the banks want to prevent derivatives transparency to make it easier for them to screw people. And the Obama administration seems to be willing to let that happen.

Now the Obama administration is making the same distinction that Wendy Gramm did in 1989. The administration at least acknowledges that it might have a problem, warning that “to make these measures effective, regulators will need to require…that customized OTC derivatives are not used solely as a means to avoid using a CCP.” But if the White House is aware that customized derivatives might be used as a way to get around CCPs, why are they making the distinction in the first place? Some will claim that simply reporting confidential data to regulators is enough. Won’t the regulators just take care of it? Well, the regulators missed the housing bubble. Partnoy’s suggestion seems like it would work a lot better:

The current crisis is proof that although most people do not trade derivatives, everyone is subject to their risks. All derivatives, exchange-traded or private, must be in the sunlight. If institutions want to negotiate individual derivatives contracts, they should tell investors the full details of their exposure.

Why should that be so hard?

[Robert Weissman has a great summary of some of the other problems with Obama’s proposals.]

*It’s worth noting that some experts don’t think derivatives like credit default swaps should even be legal in the first place. Credit default swaps allow you to buy or sell insurance on debt you do not own. George Soros says “it’s like buying life insurance on someone else’s life and owning a licence to kill.” There’s a reason you can’t buy fire insurance on your neighbor’s house—it gives you an incentive for arson. Maybe the same rules should apply in finance.