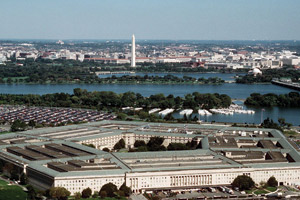 This is Part V in a Mother Jones special report on the defense budget. Click the links for Parts I, II, III, and IV.

Is defense reform a lost cause? To answer that question, MoJo talked to defense experts, mined years of GAO reports and congressional testimony, and found that the same themes crop up again and again. Here are the main problems that defense reforms almost always fail to truly address:

The best way to get a sense of the monumental task facing President Obama and Defense Secretary Robert M. Gates is to look at the special commissions, reform initiatives, and tough new laws that Washington has been churning out ever since the Pentagon was created. Some of these measures did more harm than good, others never got off the ground, and still others remain on the books but are rarely, if ever, enforced. Here’s a brief but sorry history of DOD “reform”:

1949: The landmark Hoover Commission exposes rampant waste at the Pentagon.

1971: The Fitzhugh Commission enlists Pentagon official David Packard to help fix the contracting process. He offers the groundbreaking conclusion that the services should “fly before you buy.” The DOD establishes a testing office to make sure that weapons are fully developed before they are purchased. The office is later found to be ineffective, because industry interests were allowed to help design the tests.

1980s: Some good news: Congress overhauls government contracting, requiring competitive bidding, accurate cost assessments, and accounting oversight. The bad news: Over the next two decades these reforms get watered down by numerous loopholes.

1981: No. 2 at the DOD, Frank Carlucci, introduces 32 initiatives to encourage more realistic cost estimates and increased competition among contractors. Carlucci also wants Congress to pay more for big programs up front rather than putting off the bulk of the expense for future years. (Any of this sound familiar?) However, his suggestions have their own shortcomings, the most glaring of which is that the Pentagon relies on contractors for estimates rather than producing its own.

1982: Nunn-McCurdy Amendment orders termination of programs whose total costs have grown by more than 25 percent over original estimates. However, Congress routinely makes exceptions at the secretary of defense’s request. Today nearly half of the DOD’s big weapons programs are in breach of the law.

1985: David Packard put in charge of another commission, discovers that nothing has changed at the Pentagon since the first one. After measures to “streamline” acquisitions are introduced, cost overruns on Air Force and development contracts more than triple.

1990s-2000s: Numerous “innovations” are made to Pentagon purchasing. See: the Federal Acquisition Streamlining Act, the Federal Acquisition Improvement Act, the Acquisition Streamlining Task Force, Total System Performance Responsibility, and the spiral development and capabilities-based acquisition initiatives. But don’t worry about keeping all the names straight. The salient fact to remember about this spurt of reform is that the number of acquisitions staffers, who oversee big, complex contracts, gets drastically reduced and the budget for their operations slashed. Much of this valuable work is outsourced to the private sector. At the Missile Defense Agency, for instance, private contractors now comprise 49 percent of the workforce charged with monitoring private contracts.

The late 1990s and Bush administration years also see the increasing use of “lead systems integrator” deals. That’s the technical term for an arrangement in which private industry teams not only design and build lucrative weapons systems, but also oversee all the contracting. Unsurprisingly, this setup produces some spectacular cases of waste and abuse, including Future Combat Systems.

2009: The White House promises to employ 20,000 more staffers over the next five years to keep track of contracts and spending—a welcome move, although it will be several years before it bears fruit. In addition, Armed Services Committee members Carl Levin and John McCain sponsor the Weapon Systems Acquisition Reform Act of 2009. The legislation initially looks promising, but some critical measures get weakened by the time it reaches Obama’s desk. For instance, although the law now promises to terminate any programs that violate the Nunn-McCurdy requirement, it doesn’t outlaw exemptions for national security purposes. You can guess what’s going to happen to that provision. The law also establishes an office of Independent Cost Assessment—but it doesn’t cover all weapons programs. The first director of the new office, by the way, is William Lynn, a former lobbyist for defense-supplier Raytheon.