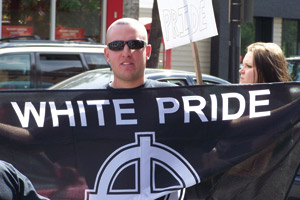 The revelation that Scott Roeder, the alleged murderer of Dr. George Tiller, belonged to an anti-government, white separatist group called the Montana Freemen might seem like an unlikely twist. After all, such groups are generally thought of as either indifferent to the issue of abortion or actively enthusiastic about its potential for reducing the nonwhite population. As it turns out, however, the journey from radical racialist to anti-abortionist isn’t as unusual as you might think.

Roeder’s connections to the right-wing fringe began well over a decade ago, according to the Kansas City Star. His ex-wife, Lindsey, said that after a few years of marriage, Roeder became increasingly involved with the Freemen and its anti-government ideology. “The anti-tax stuff came first, and then it grew and grew. He became very anti-abortion…That’s all he cared about is anti-abortion. ‘The church is this. God is this.’ Yadda yadda.” Noting that she vehemently disagreed with her ex-husband’s views, Lindsey Roeder told the Star that he moved out in 1994. “I thought he was over the edge with that stuff,” she said. “He started falling apart. I had to protect myself and my son.”

In 1996, Roeder was arrested in Topeka after sheriff deputies stopped his car because it had no license plate. Instead, the Star reported, “it bore a tag declaring him a ‘sovereign’ and immune from state law. In the trunk, deputies found materials that could be assembled into a bomb.” Roeder was convicted, sentenced to two years probation, and told to stay away from far-right groups. A state appeals court subsequently overturned the conviction.

Roeder and the Freemen belonged to a little-recognized nativist political movement that began in the early 20th century, flared up periodically, and then ripped through the American heartland during the farm depression of the mid-1980s. This movement was often called “the posse,” after a core group named the Posse Comitatus. Like any political movement, it consisted of a myriad of shifting entities that appeared and disappeared. But even though the names of the groups often changed, they all held tightly to the notion that the true white sovereigns, who had rightfully been given this land by God, were being threatened by race traitors “inferior races” creeping across the borders from Mexico and lands farther south. A favorite posse image was a drawing of a man hanging by the neck from a tree on a hill. Below in the distance stands a group of armed men. A sign is scrawled on the drawing. It says “The posse.”

Over the years, this movement has encompassed various remnants of the Ku Klux Klan, what was left of Lincoln Rockwell’s Nazis, the national socialists of William Pierce, and skinheads. Sometimes, adherents of the Posse ideology operated underground. Sometimes, they attempted to win support via electoral politics, like the white supremacist David Duke, who ran numerous times for statewide and national office. Terry Nichols, who along with Timothy McVeigh carried out the Oklahoma City bombing in 1995, dabbled with the concept of sovereign citizenship. The militia movement, too, was an outgrowth of the posse movement. Daniel Levitas, author of a book about the phenomenon, has described Roeder’s group, the Montana Freemen, as “the direct ideological descendants of the Posse Comitatus.”

The Freemen aimed to rid the nation of “14th Amendment citizens”—anyone who wasn’t a white Anglo Saxon directly descended from God. Nonwhites, or “mud people,” weren’t really people at all, but God’s failed attempts to create Adam and Eve in the Garden of Eden. A bad Xerox copy, they used to say. These beliefs derived from a school of thought known as Christian Identity, which holds that Jews, blacks, and other minorities aren’t actually people and therefore don’t deserve constitutional rights. Instead, those rights are reserved for so-called “white Sovereigns,” who aim to take over government and run it through grand juries of the people, with laws enforced by old-time posses.

The Freemen achieved notoriety in 1995, when they moved into a foreclosed farm in Garfield County, Montana, which they named Justus Township. Here they cached weapons and ammunition, dug bunkers, stockpiled food, and cut off a county road. They prepared for a siege with the feds. But the FBI eventually brought in an attorney connected to the Aryan Nations and worked out a surrender deal. Some of the Freemen were prosecuted for running a check scam. (One of the most detailed accounts of the Freemen and the unraveling of the far-right movement is contained in Blood and Politics, a new book by Leonard Zeskind. He is the leading historian of the scene.)

One might think that the divisions between pro-life Christians and far-right racists would preclude any sort of working alliance. Evangelical Christians thought that the creation of Israel was a sign of the Second Coming of Christ and became keen supporters of that country. The racialists, meanwhile, hated Israel and detested Jerry Falwell for supporting it. The Klan historically loathed Catholics, and modern far-right leaders like Tom Metzger in California thought abortion was a great way to stem the tide of brown and black babies who were burdening the welfare system and who as adults would threaten white political power.

In the early and mid-’80s, however, the racialist underground often railed against abortion. I wrote about this development in the Village Voice:

Bob Mathews, leader of a terror gang known as The Order, saw abortion as the suicide of the white race. Jim Wickstrom, the Christian Identity leader of another underground terror group called the Posse Comitatus, ranted against Jewish doctors and nurses who engaged in abortion. Posse screeds claimed the space program was part of a plot to get rid of aborted fetuses by blasting them into space.

By the 1990s, the far right had started to attack abortion clinics. Ray Lampley, a far-right racialist in Oklahoma, and two members of a national militia were convicted in federal court of conspiring to bomb abortion clinics (along with gay bars, welfare offices, an Anti-Defamation League office, and the Southern Poverty Law Center in Montgomery, Alabama). In Spokane, Washington, three men who claimed ties to a group called the Phineas Priesthood were charged with the bombings of a newspaper office and a Planned Parenthood clinic. The group is named for a Bible story in which Phinehas slew an interracial couple. Today’s Phineas Priesthood has been popularized by the white separatist William Pierce, whose 1989 book, The Hunter, tells the story of a drive-by killer who starts out murdering interracial couples and works his way up to killing Jews in order to save the future of white civilization. Paul Hill, who was sentenced to death for the murder of an abortion doctor and his escort, has written an essay calling for “Phineas actions.” In 1994, he told USA Today, “I could envision a covert organization developing—something like a pro-life IRA.” (Hill was executed in 2003.)

What was the bridge between the posse movement and anti-abortionist fanaticism? The Sovereign crowd viewed women as chattel, and the prospect of an independent woman deciding to seek an abortion didn’t sit well with them. I gained some insight into this line of thinking in another piece I once wrote about a young woman in Oklahoma who aspired to join the Christian Identity group, hoping that its followers would teach her to shoot and become a guerrilla. Instead, the men asked her for sex. When the woman replied that she wanted a relationship first, one of them replied, “Women are for breeding.” According to one faction of the group, women who have abortions are race traitors and should be stoned to death. With that in mind, the fact that some members of the far-right became violent anti-abortionists perhaps shouldn’t come as such a surprise.