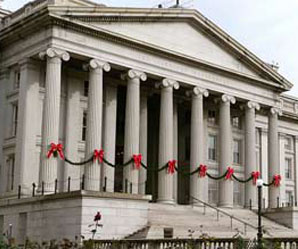 Last week was a milestone for US treasury secretary Tim Geithner. He finally got to play the hero. The morning of June 9, Treasury notified 10 financial institutions, including JPMorgan Chase, Goldman Sachs, Morgan Stanley, US Bancorp, and Capital One Financial, that they were “eligible to complete the repayment process” for the capital they received under the Troubled Assets Relief Program (TARP). In other words, they would be allowed to pay back $68.3 billion. Even though they really owe $229.7 billion. That we know of. But Geithner didn’t mention that last bit. Instead, he professed that “these repayments are an encouraging sign of financial repair,” with the caveat that “we still have work to do.”

The “we” he refers to is himself and Wall Street, both of whom are getting a good deal out of this fractional payback scheme. The agreement frees the banks from restrictions on executive pay or, worse, their general practices, but it still allows them to keep the cash they’ve received through non-TARP venues like the FDIC Temporary Liquidity Guarantee Program— or the massive sums the banks recovered from AIG (thanks to its own federal bailout) to cover their losses on credit derivatives. Not to mention any cash provided by the mother of all cheap loan programs—the Federal Reserve.

Geithner, for his part, gets to convey the message that things are looking up. “These repayments follow a period in which many banks have successfully raised equity capital from private investors,” stated the press release. “Also, for the first time in many months, these banks have issued long-term debt that is not guaranteed by the government.”

Well, of course certain banks have raised some money on their own: Firms have a tendency to look a whole lot better when they’re backed by government capital and have cheap federal loans sitting on their books. Private investors notice that sort of thing. But more troubling than the misplaced praise is the fine print that accompanied the announcement: “These repayments,” the department noted, “help to reduce Treasury’s borrowing and national debt. The repayments also increase Treasury’s cushion to respond to any future financial instability that might otherwise jeopardize economic recovery.”

This statement belies some accounting sleight of hand.

First off, it conveniently ignores the fact that TARP accounts for a fraction—about $700 billion—of the government’s $13 trillion banking stabilization scheme. At some point, investors are going to balk at buying up federal debt (Treasury bonds), thereby forcing the government to pay higher interest rates, which will wipe out much of the TARP payback benefit. The second sentence is more ominous: It suggests that if banks need that money back, it’ll be waiting for them right there at the Treasury Department.

On the day of his announcement, Geithner acknowledged to the Senate Appropriations Committee that “while we see some initial signs of economic improvement and the financial system is beginning to heal, our country faces very substantial economic and financial challenges.” Indeed, the banking sector has not gotten substantially better lately. According to a report compiled by the Investigative Reporting Workshop and MSNBC, the number of delinquent or defaulting bank loans grew by 22 percent during the first quarter of 2009—six out of ten banks were, in fact, even less prepared to absorb further losses than they had been during the last, abysmal quarter of 2008.

While the treasury secretary conveyed to the senators some understanding of the plight of the rest of us, this show was all about Treasury and the banking sector. Geithner praised the government for pulling off stress tests of the 19 largest financial institutions last month. “The clarity and transparency provided by the tests,” he said, “has helped improve market confidence in the banks, making it possible for them to collectively raise nearly $90 billion through private equity offerings, bond issuances without government guarantees and sales of business units.”

But Tim’s not playing it straight. The fact that most of these banks passed their stress tests would only have mattered if the tests had any value. As I discussed when the tests were first unveiled, these tests were designed in tandem with the banks, the evaluations were provided by the banks, and some of the assumptions they were based upon—such as where unemployment would be—had been exceeded before the test results were released.

In fact, the stress tests have little to do with anything, but two other sources of capital for banks do. The main one is the Fed, which loans money to banks at stupidly low rates through a variety of facilities and loan-guarantee programs that total $7.9 trillion. In return, the banks can post as collateral an assortment of complex assets that no one but the Fed has any record of.

Banks can also borrow cheaply if they have an FDIC guarantee—and then use that cheap money to do things like pay TARP back, which explains why their stocks have gone up. The government opened this door on October 14, 2008, with the FDIC’s Temporary Liquidity Guarantee Program. The idea was that it would prompt banks to start lending to their customers again. But that didn’t happen. Instead, cunning institutions used the new program to raise cheap capital for their own needs. By changing its status to a bank holding company, Goldman Sachs was able to secure $29 billion of that FDIC-backed debt; Morgan Stanley raised nearly $24 billion.

The banks paying back the TARP funds aren’t doing any better than their peers. In the first quarter of 2009, JPMorgan Chase’s troubled asset ratio—the ratio of bad loans to the cash a bank has set aside to cover them—increased by nearly 16 percent, US Bancorp’s by 21 percent, and Capital One’s by 17 percent, numbers that put them in the same ballpark as many banks that are holding their TARP money.

In the meantime, average Americans, who don’t have a $13 trillion federal insurance policy to fall back upon, have fared poorly. Over the past three months, unemployment has hopped a full point, to 9.4 percent—nearly double what it was one year earlier. For the third straight month, home foreclosures have broken the 300,000 mark, with the defaults reaching well into the prime loan turf, and home prices are still falling.

Considering the true size of the bailout, the continued loan deterioration, and the weakness in the overall economy and job market, the economic signs simply aren’t that positive. For Geithner to pretend that a few banks paying back federal money with other federal money is an encouraging sign is to miss all of them.