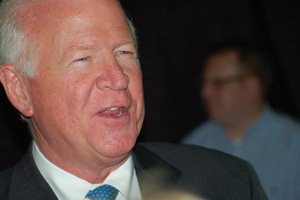 This is Part IV of a Mother Jones special report on the defense budget. Click the links for Parts I, II, III, and V.

As the defense budget moves into its final stages, the horse-trading is going to get pretty intense. Who will be the key players? The heads of the appropriations committees act as the ultimate gatekeepers in this process. In the House that’s Rep. Dave Obey (D-Wis.), and in the Senate, Daniel Inouye (D-Hawaii)—or, as he likes to call himself, the “king of pork.”

It’s also worth scrutinizing legislators from states where Boeing is active (like Missouri, Kansas, Washington, and California) because Boeing is the contractor hit hardest by the Gates budget. Here are five lawmakers who deserve extra-close attention:

MO: Inhofe will leave no rhetorical bomb unthrown in his battle to save weapons systems which are vital to the nation’s security and which also happen to be made in Oklahoma. Here he is standing on a tarmac in Afghanistan charging that Obama is trying to “disarm America” to increase “welfares to an unconscionable high.”

MO: The Georgia delegation is expected to fight hardest for the F-22—it employs around 2,000 workers who construct the plane’s airframe at a Lockheed plant in Marietta. Like Inhofe, Chambliss is not a very subtle guy. He has already said that the administration is “willing to sacrifice the lives of American military men and women for the sake of domestic programs favored by President Obama.”

MO: Lieberman is likely to be a major opponent of even small cuts to missile defense. He may also pull some tricky maneuvering on the VH-71 presidential helicopter. He’ll probably support cutting it, but only because he wants a replacement contract to be awarded to a Connecticut-based company called Sikorsky.

MO: The House’s reigning porklord originally wanted to add $10 to 12 billion dollars worth of extra defense spending to supplemental war spending bills this year. He didn’t succeed, although the final legislation still contained nearly $5 billion for equipment that the Pentagon didn’t request. Look for Murtha to try again when the House appropriations committee gets its hands on the main defense budget bill.

Pet program: The C-17 cargo plane. More than 5,000 workers assemble the C-17 at a plant in Long Beach, and thousands more work on the plane elsewhere in the state.

MO: For three years the Pentagon has said it doesn’t need any more C-17s, which cost around $276 million each. And for three years California’s congressional delegation has insisted that the government buy more of them, with Boxer playing a leading role. This may be the only issue on which she and Republican hardliner Dana Rohrabacher have ever seen eye to eye, although as far as we know only Boxer attempts to justify the program by arguing that the C-17 comes in handy on humanitarian missions. This year the plane’s backers have won out yet again: Congress already inserted $2 billion for more C-17s into the war supplemental legislation.