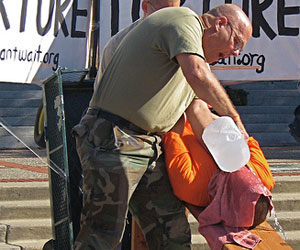 Not everyone in the Bush administration supported the use of torture. A trio of high ranking officials in the State Department and the Pentagon waged bureaucratic war against use of so-called enhanced interrogation techniques, including waterboarding, on detainees. They lost this battle, but one of the three is now telling their story.

Testifying on Wednesday morning before a Senate Judiciary subcommittee, Philip Zelikow, a former top advisor to Secretary of State Condoleezza Rice, called for a “thorough inquiry, yielding a public report,” into Bush-era interrogation policies. Zelikow has previously said that a 2005 anti-torture memo he authored was ordered to be “collected and destroyed” by the Bush White House. At the hearing, two other internal memos opposing the administration’s detainee policies (the existence of which Zelikow described to Mother Jones last week) were released. (You can read highlights of the anti-torture memos on our blog.)

Zelikow painted a picture of a small team of dissidents within the Bush administration who argued against the administration’s interrogation policies. At some point in 2005, Zelikow said in prepared remarks, “the president indicated his readiness to hear alternatives” to the policies that were in place at the time. And Zelikow, along with then-State Department legal adviser John Bellinger, and then-deputy defense secretary Gordon England, obliged, producing a joint paper [PDF] outlining a new set of standards on how detainees should be treated. “While balancing the danger these individuals may present, they must be treated humanely, consistent with our values and the values of the free world,” they noted.

But after they submitted the paper, top Bush administration officials apparently didn’t like what they saw. According to Zelikow, Defense Secretary Donald Rumsfeld not only disavowed the memo, but also retaliated against his subordinate, Gordon England, stripping him of jurisdiction over detainee issues. Zelikow and Bellinger continued to advance their anti-torture argument. In July 2005, they circulated another unclassified memo [PDF] that called for the Bush administration to adopt the CID—the “cruel, inhumane, and degrading” standard used by Common Article 3 of the Geneva Conventions.

By that fall, the arguments Zelikow and Bellinger outlined in the July 2005 memo were starting to gain traction, Zelikow said. On December 5, Condoleezza Rice announced publicly that the CID standard would be the rule governing conduct by any US agency anywhere in the world. (“Perhaps coincidentally,” Zelikow snarked in a footnote to his prepared testimony, “CIA officials destroyed existing videotapes of its coercive interrogations in this same time period, November 2005.”)

But Zelikow would soon realize that he and the administration differed on what constituted cruel and inhumane treatment. The Justice Department’s Office of Legal Counsel, “held that, even if the [CID] standard did apply, the full CIA program—including waterboarding—complied with it,” he said.

In order “to challenge OLC’s interpretation, it was necessary to challenge the Justice Department’s interpretation of US Constitutional Law,” Zelikow said. So that’s what he did, distributing a classified memo analyzing the OLC’s legal reasoning, “probably in February 2006.” Zelikow would later reveal the existence of this document in April, as the debate over Obama administration’s release of Bush-era legal memos justifying the use of waterboarding, and other harsh tactics, climaxed.

“I later heard the memo was not considered appropriate for further discussion,” Zelikow said, “and that copies of my memo should be collected and destroyed.”

Last week, Zelikow told Mother Jones that he suspected the order to deep-six the memo may have come from Vice President Dick Cheney’s office. Zelikow ignored that order—and his memo has apparently been located and is in the process of being declassified.