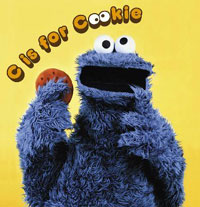 Image used from </em><a href="http://s228.photobucket.com/albums/ee212/not_dead_yet_2007/?action=view&current=cookie-monster.jpg"><em>Photobucket</em></a><em> under a Creative Commons license.</em>

In the week after 9/11, unleashed deep within a Yemeni prison was what might have been the most effective interrogation tool ever devised by the U.S. Government. It could be more powerful than waterboarding, sleep deprivation, naked photos, or barking dogs. It is a monster that resides within almost all of us, a shaggy, blue-haired beast with an uncontrollable urge to devour oven-baked sweets while growling, “Coooookie!”

From Time comes this account of FBI interrogator Ali Soufan’s successful attempt to win over  Al-Qaeda operative Abu Jandal, who had been closer to Osama bin Laden than any other terrorist ever captured:

He had no intention of cooperating with the Americans; at their first meetings, he refused even to look at them and ranted about the evils of the West. Far from confirming al-Qaeda’s involvement in 9/11, he insisted the attacks had been orchestrated by Israel’s Mossad. While Abu Jandal was venting his spleen, Soufan noticed that he didn’t touch any of the cookies that had been served with tea: “He was a diabetic and couldn’t eat anything with sugar in it.” At their next meeting, the Americans brought him some sugar-free cookies, a gesture that took the edge off Abu Jandal’s angry demeanor. “We had showed him respect, and we had done this nice thing for him,” Soufan recalls. “So he started talking to us instead of giving us lectures.”

All hail the Cookie Monster!  Seriously, his brand of monstrousness might be the the only kind we need:

Soufan, now an international-security consultant, has emerged as a powerful critic of the George W. Bush — era interrogation techniques; he has testified against them in congressional hearings and is an expert witness in cases against detainees. He has described the techniques as “borderline torture” and “un-American.” His larger argument is that methods like waterboarding are wholly unnecessary — traditional interrogation methods, a combination of guile and graft, are the best way to break down even the most stubborn subjects.