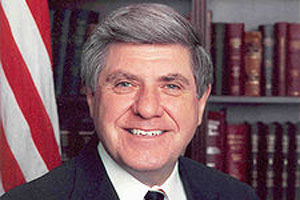 Geek god Lawrence Lessig‘s new-ish organization, Change Congress, aims to expose and curtail the influence of money in politics. They’re not being polite about it. On Thursday, Change Congress accused Sen. Ben Nelson (D-Neb.) of “Good souls corruption“—”legal, even ethical acts that reasonably lead the public to wonder whether it is the merits or the money that is driving this Senator’s decision.”

In this particular case, Change Congress makes the shocking observation that Nelson’s receipt of millions of dollars from insurance and health care interests might call the sincerity of his (now-renounced) opposition to a public health insurance option into question.

Nelson is apparently taking the attack seriously—his office has already responded with an extensive press release that calls Change Congress’ charges a “misleading fundraising gimmick.”  Lessig and Change Congress deny that they’re fundraising around this issue, and point out that they’ve asked people to stop giving money to Congress. The press release contains some other bold claims. Boasting about your past as an “insurance executive” and your present representing “the insurance capital of the world” is not the best way to prove your distance from inappropriate influence from the insurance industry. (Lessig has fisked Nelson’s press release here.)

What Lessig really wants is for Congress to pass the Trustworthy Government Act, formerly known as the Fair Elections Now Act, which would bring about publicly funded elections and (presumably) end Congress’ well-documented dependence on contributions from lobbyists and special interest groups.

Good government groups have been trying to pass public funding legislation for decades. But Change Congress’ ability to rile up members of Congress and actually get responses is a new development. Rep. John Conyers (D-Mich.), the last target of a Change Congress attack, also responded to the criticism with a hysterical defense. Maybe the reason members of Congress are responding so defensively is that CC is striking a little too close to home. Apparently members of Congress are shocked by the nerve—the nerve!—of people who tell them that taking huge amounts of money from the industries they’re in charge of regulating reeks of corruption. Lessig:

By (a) introducing legislation that has no good public policy justification behind it and which (b) does not benefit your own constituents while (c) being disproportionately supported in financial contributions by the single industry that would benefit from the legislation, you invite the charge (as 88% of citizens in my district believe) that “money buys results in Congress.” WHETHER OR NOT “money bought” this result, you have committed this wrong.

Instead of responding hysterically when someone suggests they are creating the appearance of corruption, members of Congress should fix the problem by not taking the money in the first place.