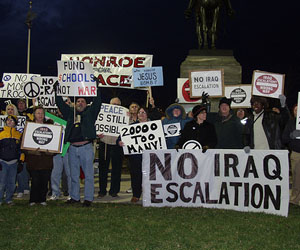 This story first appeared on AlterNet.

Editor’s note: MoveOn has sent a response to Tom Hayden, which is published below his article.

The most powerful grassroots organization of the peace movement, MoveOn, remains silent as the American wars in Iraq, Afghanistan and Pakistan simmer or escalate.

The executive director of MoveOn, Justin Ruben, met with President Obama in February, told the president it was “the moment to go big,” then indicated that MoveOn would not be opposing the $94 billion war supplemental request, nor the 21,000 additional troops to Afghanistan, nor the increased civilian casualties from the mounting number of Predator attacks. [See Ari Melber, The Nation, Feb. 27, 2009]

What was MoveOn’s explanation for abandoning the peace movement in a meeting with a president the peace movement was key to electing? According to Ruben and MoveOn, it was the preference of its millions of members, as ascertained by house meetings and polls.

The evidence, however, is otherwise. Last December 17, 48.3 percent of MoveOn members listed “end the war in Iraq” as a 2009 goal, after health care [64.9%], economic recovery and job creation [62.1%], and building a green economy/stop climate change [49.6%, only 1.5% ahove Iraq.] This was at a moment when most Americans believed the Iraq War was ending. Afghanistan and Pakistan were not listed among top goals which members could vote on.

Then on May 22 MoveOn surveyed its members once again, listing ten possible campaigns for the organization. “Keep up the pressure to the end the war in Iraq” was listed ninth among the options.

Again, Afghanistan and Pakistan were not on the MoveOn list of options.

Nor was Guantanamo nor the administration’s torture policies. “Investigate the Bush Administration” was the first option.

MoveOn is supposed to be an Internet version of participatory democracy, but the organization’s decision-making structure apparently assures that the membership is voiceless on the question of these long wars.

What if they included an option like “demanding a diplomatic settlement and opposing a quagmire in Afghanistan and Pakistan?”  Or “shifting from a priority on military spending to civilian spending on food, medicine and schools?”

This is no small matter. MoveOn has collected a privately-held list of five million names, most of them strong peace advocates. The organization’s membership contributed an unprecedented $180 million for the federal election cycle in 2004-2006. Those resources, now squelched or sequestered, mean that the most vital organization in the American peace movement is missing in action.

What to do? There is no point raving and ranting against MoveOn. The only path is in organizing a dialogue with the membership, over the Internet, and having faith that their voices will turn the organization to oppose these escalating occupations. The same approach is necessary towards other vital organs of the peace movement including rank-and-file Democrat activists and the post-election Obama organization [Organizing for America], through a persistent bottom-up campaign to renew the peace movement as a powerful force in civil society.

This is not a simple matter of an organizational oligarchy manipulating its membership, although the avoidance by MoveOn’s leadership is a troubling sign. There is genuine confusion over Afghanistan and Pakistan among the rank-and-file. The economic crisis has averted attention away from the battlefront. Many who voted for Obama understandably will give him the benefit of the doubt, for now.

Silence sends a message. The de facto MoveOn support for the $94 billion war supplemental reverberates up the ladder of power. Feeling no pressure, the Congressional leadership has abdicated its critical oversight function over the expanding wars, not even allowing members to vote for a Decmber report on possible exit strategies. In the end, a gutsy sixty voted against HR 2346 on May 14, but many defected to vote for the war spending, including Neil Abercrombie, Jerry Nadler, Obey, Xavier Becerra, Lois Capps, Maurice Hinchey, Jesse Jackson, Sheila Jackson-Lee, Patrick Kennedy, Charles Rangel, Lucille Roybal-Allard, Loretta Sanchez, Rosa De Lauro, Bennie Thompson, Jerry McNerney, Robert Wexler, and Henry Waxman. [Bill Delahunt, Linda Sanchez and Pete Stark were not recorded].

If there were significant pressures from networks like MoveOn in their Congressional districts, the opposition vote might have approached 85.

Appropriations chair David Obey in essence granted Obama a one-year pass to show results in Afghanistan. If the war appears to be a quagmire by then, he claimed, the Democrats will become more critical. Speaker Nancy Pelosi delivered the same message; according to the Washington Examiner on May 6: “There won’t be any more war supplementals, so my message to my members is, this is it.” Pelosi’s words were carefully parsed, saying that the White House would not be allowed another supplemental form of appropriation, which is different from an actual pledge to oppose war funding.

This one-year pass means that the grass-roots peace movement has a few months to light a fire and re-awaken pressure from below on the Congress and president. In the meantime, here are some predictions for the coming year:

IRAQ: Will Obama keep his pledge to withdraw combat forces from Iraq on a 16-month timetable, and all forces by 2011? At this point, the pace is slowing, and the deadline being somewhat extended, under pressure from US commanders on the ground. Sunnis are threatening to resume their insurgency if the al-Maliki regime fails to incorporate them into the political and security structures. The President insists however, that he is only making adjustments to a timetable that is on track. Prognosis: precarious.

AFGHANISTAN: Will the Obama troop escalation deepen the quagmire or be a successful surge against the Taliban by next year? Another 21,000 troops and advisers are on their way to the battlefield. Civilian casualties are mounting, causing the besieged Karzai government to complain. Preventive detention of Afghans will only expand. US deaths, now over 600, are sure to increase this summer. Taliban may hold out and  redeploy in order to stretch US forces thin. Prognosis: escalation into quagmire.

PAKISTAN: US policies have driven al Qaeda from Afganistan into Pakistan’s tribal areas, where US is attacking with Predators and turning Pakistan’s US-funded armed forces towards counterinsurgency. Public opinion is being inflamed against the US intervention. Prognosis: an expanding American war in Pakistan with greater threats to American security.

IRAN: With or without US complicity, Israel may attack Iran early next year, with unforeseeable consequences in Iraq and Afghanistan. Prognosis: crisis will intensify.

GLOBAL: US will fail to attract more combat troops to fight in Afghanistan and Pakistan from Europe or elsewhere, causing pressure to increase for a non-military negotiated  solution. Prognosis: Obama still popular, US still isolated.

BUDGET PRIORITIES: Iraq, Afghanistan and Pakistan will deeply threaten the administration’s ability to succeed on the domestic front with stimulus spending, health care, education and alternative energy. Prognosis: false hope for “guns and butter” all over again.

Tom Hayden served 18 years in the California legislature, and is the author of ten books.

We appreciate Tom Hayden’s attempt to start a discussion here about the progressive posture on security issues, and we even understand his attempt to use MoveOn as a foil.  We agree that it’s time to confront the organizing challenges of building an effective peace movement in the Obama era, and we expect MoveOn and MoveOn members to play an important role in this.

In order to have a productive conversation, however, we have to make sure the facts are correct. Tom’s characterization of our democratic process is inaccurate; the Top 10 issues we focus on were both nominated by and chosen by MoveOn members. Even more erroneous is Tom’s description in the lead of his piece of Justin’s conversation with the President.  Our Executive Director, Justin Ruben, never “indicated that MoveOn would not be opposing the $94 billion war supplemental request, nor the 21,000 additional troops to Afghanistan, nor the increased civilian casualties from the mounting number of Predator attacks.”  The article by Ari Melber which Tom referenced as a source does not say that Justin said this. That particular conversation was about MoveOn members’ current organizing focus on energy, health care, and the economy.  And our belief that the administration should “go big” on progressive policies in these arenas.