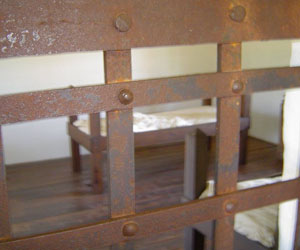 Photo used under a Creative Commons license by flickr user <a href="http://www.flickr.com/photos/gloomystudio/">gloomy50</a>

We are, famously, blasé about our acts of torture overseas. But why? The laser-like focus on fixing the economy, wanting to avoid more political divisiveness, the diminishment of watchdog journalism—are all part of the explanation. But there’s another overlooked reason as well.

Americans tend to valorize tough love—at times, even tough love that verges on torture—in prisons, mental hospitals, drug rehabs, and teen boot camps. We aren’t squeamish about the psychological aspects of torture. We might even admire them.

Thousands also attend religiously based residential programs, some of which claim to “cure” homosexuality and stop teen promiscuity. In this context, the recent poll showing that evangelicals are the group with the highest level of support for torture begins to make sense.

If we think humiliation, stress positions, and isolation are OK for disobedient teens, why not for suspected terrorists?

As the author of the first book-length history and expose of the troubled-teen industry, I’m familiar not only with the distressing stories of abuse coming from these programs, but also with their roots in the same tactics now being exposed in the CIA torture program.

If more people understood the psychological and physical consequences of these “thought reform” techniques, I don’t think we’d find them acceptable for anyone.

Here’s what is known about the parallels between “enhanced interrogation” teen boot camps and the idea of “thought reform” programs first described by psychiatrist Robert J. Lifton in the 1950’s—and about how they damage the mind and body.

As we’ve learned from the torture memos, the tactics used against suspected Al-Qaeda prisoners were based on American military counter-interrogation training known as SERE (Survival, Evasion, Resistance and Escape). SERE tried to teach soldiers to resist tactics that were used by the Chinese and Koreans in the 1950’s to break American servicemen and their own citizens.

Breaking someone, it turns out, needn’t involve much of what conventionally has been called torture. Instead, by the skilful control of the environment and use of things like complete isolation from the outside world, stress positions, hard physical labor, sleep deprivation, food deprivation, temperature extremes and humiliation, one can create a regime that relatively quickly warps the mind and produces at least the illusion of compliance.

All of these tactics—everything short of water-boarding—have been found to be used in a surprising number of teen programs. In 1974, in fact, a Congressional investigation said that tactics used by The Seed program on kids were “similar to the highly refined brainwashing techniques employed by the North Koreans in the early 1950’s.”

Hundreds of programs operating now are directly or indirectly tied to the program that was the model for The Seed, a cult called Synanon.

In an October 2007 Congressional hearing, Government Accountability Office investigators and other witnesses described teens being publicly humiliated, sleep deprived, starved, denied medical care and “forced to eat vomit [and] lie in urine and feces.” So this has been done to kids for at least three decades.

The key to understanding why these controlling, humiliating regimens work to produce apparent compliance and how dangerous they are to mental health is social neuroscience. It turns out that the human stress system is modulated by social support. That means that what turns off—or on—our stress systems, is mainly other people.

In fact, keeping one’s stress hormones balanced requires the comfort of others: Even short periods of forced isolation can make them spiral out of control.

If in addition, you deprive someone of all physical affection, further overload the stress system via temperature extremes, low calorie diets, and physical stresses like over-exercise or confinement, you have a perfect storm of traumatic experience.

A critical element here is combining these tactics to undermine any sense of control—the more helpless a person feels, the more dangerous traumatic stress becomes. The psychologists who devised the “enhanced interrogation techniques” explicitly wanted to create dependence, reading the literature on what psychologist Martin Seligman termed “learned helplessness.”

Learned helplessness is actually based on an animal model of depression, and has also been linked with causing PTSD, panic attacks, and even reduced immunity.

Another aspect that interrogators recognize to be critical in destroying a person’s sense of self is humiliation. This includes seemingly benign things like taking away preferred clothing and more extreme identity degradation tactics like keeping people either naked or in humiliating outfits and denying bathroom access, including hygiene.

Constant emotional attacks—particularly sexual humiliation and insults that emphasize worthlessness and hopelessness—also help leave people vulnerable to the provision of brief moments of kindness, for which, by that point, most people will do or say anything.

It seems hard to believe that it is that easy to break people’s wills—but understanding the brain’s stress system again offers insight. Under intense stress, higher brain regions have less control over the mind and body: the faster, more reactive regions dominate in order to facilitate fight or flight.

And chronic, intense stress can be even more damaging: it “burns in” these hair-trigger responses and connections that give greater control to lower brain regions while damaging the area needed for long-term learning and memory, the hippocampus. This can produce depression, post-traumatic stress disorder, and even high blood pressure, heart disease, and stroke.

However, because of social modulation of stress and the importance of a sense of control, these conditions do not have anywhere near as great an impact if the person chooses voluntarily to undergo them, has social support and knows that the ordeal will end at a certain time.

Comparing a teen who chooses to stay up all night partying or a guy who likes to stand while working at the office with people who are forced to do those things is thus invalid. The physiology of voluntarily undergoing time-limited stress induced by people you trust and being forced into it by those you don’t are completely different.

There would be an interesting debate to be had on the use of these regimes if they produced lasting positive behavior change in the direction desired by their enforcers. In terms of interrogation, some people might find it acceptable to intentionally provoke depression and PTSD in suspected terrorists if that could prevent attacks. In terms of addicts and teenagers, however, it makes no sense at all, given that both PTSD and depression increase the risk of developing new addictions or relapse to older ones.

And, in fact, imposing traumatic stress—as the researchers who studied the victims of the Koreans and the Chinese discovered back in the 1950’s and 60’s—is not a good way of producing either reliable information or behavior change. Damaging the brain regions responsible for concentration and memory and potentially inducing psychotic delusions is not a good way to discover the truth or promote better behavior.

Stories of teens held in abusive drug programs are instructive here: there are countless cases of false confessions. Kids who had done nothing more than smoke pot came out with tales of shooting heroin and smoking crack—virgins told stories of becoming prostitutes forced to have sex with animals in order to support their habits. These were not isolated events—having interviewed dozens of kids with this experience, false confessions were a common thread, many of them bizarre. Drug-related behavior after the program was often far worse than before.

Further, while many people are resilient to traumatic stress and some are made stronger by it, the damage done by imposing it doesn’t just affect victims. Perpetrators are harmed, too—by feelings of guilt, by having to shut off compassion and empathy and by the corrupting nature of having absolute power over people.

This also produces an acceptance of the previously unacceptable, a culture of callousness that erodes trust and replicates itself, causing more hopelessness and calls for even more extreme measures.

If we want to return to America’s ideals, we have to look at why we’ve tolerated this kind of treatment for anyone—not just terrorists, but vulnerable youth—for decades.

Most of all, we need to stop thinking that getting tough is the answer to everything. It’s often harder to resist kindness and compassion than it is to submit to brute force and tell your captors what you think they want to hear. This is, in part, why the FBI wanted nothing to do with “enhanced interrogation.” The data on both teen treatment and legal interrogations by the FBI are clear: torturous tactics are both unnecessary and harmful.

By eliminating these coercive regimes from every aspect of our culture, we will not only do good, but do well.

Maia Szalavitz is the author of “Help At Any Cost: How the Troubled-Teen Industry Cons Parents and Hurts Kids.”