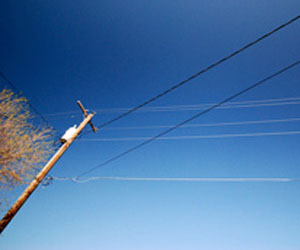 This story first appeared on ProPublica.org.

A key stimulus program to bring Internet service to rural America may not be up to the job of spending its $2.5 billion in extra funding effectively, according to a report (PDF) released Monday by the U.S. Department of Agriculture’s inspector general.

The Rural Utilities Service’s broadband program faced heavy criticism in 2005 when auditors found irregularities (PDF) with a quarter of the funds the program had received in its first four years of operation. In one case, the program loaned $45 million to wire affluent subdivisions in the Houston suburbs—including one that was built around a golf course and another outside one of the richest cities in Texas.

Monday’s report found that the Rural Utilities Service continues to grant loans to areas that already have broadband service and to communities near major cities.

“We remain concerned with RUS’ current direction of the broadband program, particularly as they receive greater funding under the American Recovery and Reinvestment Act,” Assistant Inspector General Robert W. Young wrote. “RUS’ broadband program may not meet the Recovery Act’s objective of awarding funds to projects that provide service to the most rural residents that do not have access to broadband service.”

In written comments attached to the report, the Agriculture Department said the law creating the broadband program contained no restrictions as to proximity to major cities. “Rural” was defined only as a community with fewer than 20,000 people.

More than 90 percent of the loan applications the agency has approved since the critical report in 2005 went to areas that already had broadband service, the report said. “OIG remains concerned because the overwhelming majority of communities…receiving service through the broadband program already have access to the technology,” Young wrote.

In nearly every speech about the federal stimulus package, President Obama has touted an initiative to expand broadband access to millions of Americans in underserved rural areas. Such an expansion, supporters say, would aid small businesses and improve access to health care and distance learning programs.

The stimulus package, passed by Congress in early February, provides $7.2 billion for broadband grants and loans. A Commerce Department agency will manage $4.7 billion while the Agriculture Department’s Rural Utilities Service will manage $2.5 billion.

That’s nearly twice as much as the rural broadband program has given out in loans over the last eight years.

The inspector general’s report also noted that 148 communities that receive broadband service funded by agency loans were within 30 miles of cities with more than 200,000 people, including communities outside Chicago and Las Vegas.

According to the Agriculture Department’s most recent report on April 3, none of the stimulus money for broadband grants has been awarded or spent.