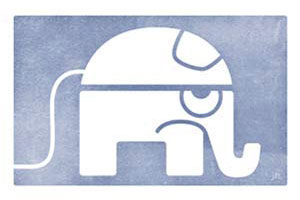 The Capitol Hill Club is a private haven for the gop‘s elite, the proverbial smoke-filled back room where Republican power brokers dine, drink, and deal. In the club’s well-appointed lobby, guests are greeted by portraits of party leaders, including House minority leader John Boehner and the recently dethroned chairman of the Republican National Committee, Mike Duncan. In other words, the men on whose watch the gop began to come apart at the seams.

It was at this exclusive locale that a party known for its rigid power structure exhibited that change had indeed come to Washington by opening the club to hundreds of outsiders, conservative Web activists who had traveled from as far as Ohio, Georgia, and Wisconsin to attend the rnc‘s first “Tech Summit.” Somewhat inauspiciously held on Friday, February 13, the open forum was designed to help the committee’s leadership bring the gop‘s outdated Web operations into the 21st century. Surveying the scene that morning was the rnc‘s silver-haired eCampaign director, Cyrus Krohn. Wide-eyed, he told me, “No idea is too small. No opportunity is too new. Innovation is king.”

The event was put together by Michael Steele, the rnc‘s embattled chair, and Saul Anuzis, the tech-savvy former head of Michigan’s Republican Party who was the favorite among the gop‘s new-media wing for the top RNC job; after winning the post, Steele brought Anuzis on as a cochair of his transition team. During the open-mic portion of the event, one young man suggested an iPhone app that would alert users when their representatives are about to vote on important issues. Another man recommended building online games to reel in young voters: Why not retool the Atari classic Paperboy so that the main character is President Obama throwing wads of cash at pork barrel projects? “Our goal is to take what Barack Obama and the Democrats did and put it on steroids,” Anuzis told me.

The Republicans were behind in the Internet arms race long before Obama raised half a billion dollars online against an opponent who admitted he was computer illiterate. But the gop‘s electoral drubbing in November “was a real punch in the gut for Republicans,” says Scott Graves, editor-in-chief of the popular conservative blog network Red County. “A lot of Republican strategists knew how to do direct mail, knew the traditional methods of getting a guy elected, but had not embraced Web 2.0. In fact, some of them hadn’t embraced Web 1.0.” (Outgoing rnc chair Duncan, when campaigning to keep his job, declared that the gop could appeal to young voters “in the Facebook, with the twittering.”)

But if the rnc hopes to level the new-media playing field, it has one major hurdle to overcome: itself. “A cultural shift has to occur at the rnc, where the people who make the decisions are people who have a phobia” of the Internet, says David All, one of the right’s leading new-media strategists. Michael Turk, who became the rnc‘s first eCampaign director following the 2004 election, knows this all too well. During his tenure, he initiated the committee’s first successful experiment with Web video, “Off the Record,” which featured two young, female rnc staffers questioning party luminaries on topics such as their favorite bands and books. The segments, says Turk, proved as popular among recipients of the rnc‘s email blasts as missives from George W. Bush. But after abc News poked fun at the interviewers’ softball questions, the rnc‘s top brass demanded to know why Turk had made the committee a punch line. They nixed “Off the Record,” replacing it with videos featuring a former TV anchor who recited gop talking points. “They were abject failures,” says Turk.

Steele understands that the committee requires a major shake-up. One of his first moves was to request the resignation of every employee, asking his transition staff to decide whom to keep. “There are two things that will get you kicked off this team,” he told the Tech Summit. “Tell me, ‘Well, we’ve always done it that way’ or ‘We’ve never done it before.’ That tells me you’re afraid of innovation.”

But modernizing the rnc is just part of Steele’s challenge. He’ll also have to figure out how to harness the gop‘s outside-the-Beltway new-media talent, which thus far is focused on imitation rather than innovation. Consider R-igg.com, a conservative foil to the wildly popular user-generated social media site Digg.com. Many conservatives feel that Digg users lean left; the idea behind R-igg, explains its 20-year-old creator, Aaron Marks, “was to create an alternative so that people on the right could share their stories in the same way.” R-igg has an attractive layout, but it receives only a couple thousand visitors a month, tops.

R-igg’s failure of emulation is not unique. TheVanguard was supposed to be the Republican MoveOn. QubeTV, Eyeblast, and YouSeeIt are conservative alternatives to YouTube. And Let’s Get This Right is the Republican doppelgänger of MySpace. With the exception of Slatecard, an online fundraising site that is the right-wing version of liberal ActBlue, none has seen much success.

Part of the blame lies with the gop pooh-bahs in Washington, says conservative Web strategist Eric Odom. To get behind a project, he says, gop insiders first want to know, “‘Is this ours?’ The idea of crowd-powered politics and crowd-powered movements doesn’t include top-down control.” But at Steele’s rnc, this could soon change. At the Tech Summit, he dramatically unclipped his BlackBerry from his belt and held it up. “When we get to 2010, I want my campaigns here,” he said. “I want whatever we’re doing to be within my thumb’s reach.”

Benjamin Rahn, who cofounded ActBlue in 2004, has watched the gestation of the gop‘s tech operations with interest. “I hesitate to say I sympathize with what my Republican counterparts are going through, but I understand what they’re going through,” he says. “Eventually, some of them are going to crack the code.”

It’s worth noting, though, that the Democrats were never able to replicate the gop‘s mastery of talk radio—and not for lack of trying. And Republicans are trying to upgrade their outreach while saddled with a much bigger challenge: determining what the party stands for. That’s not something that can be solved with technology. Stepping up to the mic at the rnc‘s Tech Summit, Sean Doughtie, who runs a Florida-based new-media firm, summed up the problem: “We can blog about blogging. We can twitter about Twitter. But what we’re experiencing as a party is a failure of our brand.”

It didn’t bode well for a party in flux when the rnc‘s Web guru, Cyrus Krohn, abruptly resigned in March. His farewell blog post was titled “rnc-YA.”