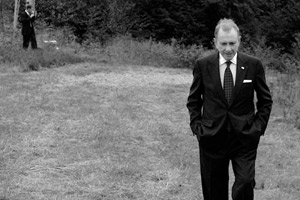 The reason Pennsylvania Senator Arlen Specter switched parties on Tuesday is rather obvious. Though Specter explained in a statement released today that it’s due to the GOP’s rightward shift (“I now find my political philosophy more in line with Democrats than Republicans,” he said), the more likely reason is that Specter’s political career would end if he remained a Republican. Unlike Vermont Senator Jim Jeffords, who abandoned the GOP and caucused with the Democrats in 2001 in a principled decision, declining to run for reelection, Specter is simply reading the tea leaves. Most available polling indicates that the moderate Specter would be trounced in the 2010 Republican primary by a conservative challenger named Pat Toomey.

Specter barely beat Toomey in the 2004 Republican primary. Since then the Republican Party in Pennsylvania has shrunk while the Democratic Party has grown. Toomey, the former head of the anti-tax group Club for Growth and a committed fiscal conservative, was particularly well suited to bash Specter for being one of the three Republican votes for President Barack Obama’s stimulus bill. Pennsylvania’s GOP base has become more rigid and extreme as it has gotten smaller. Specter acknowledged this in his statement: “I am unwilling to have my twenty-nine year Senate record judged by the Pennsylvania Republican primary electorate. I have not represented the Republican Party. I have represented the people of Pennsylvania.” Toomey, who once wrote that Hillary Clinton’s economic views are based on a “fundamental mistrust of individual freedom,” is a better fit the new, more conservative Pennsylvania GOP. Specter could win among Republicans in 2004. He likely couldn’t do it in 2010.

So credit the far right’s ascendancy in the modern GOP for handing Senate Democrats a 60-vote majority (pending the expected seating of Al Franken). The Republican Party has moved dramatically rightward in the age of Obama, and allowed people like Newt Gingrich, Dick Cheney, Rush Limbaugh, Glenn Beck, and Sarah Palin to become its most vocal representatives. Not only did this alienate the moderate Specter (and cause him to fear for his future in the GOP); it created space for a right-wing purist like Toomey to run and win in a primary. (Toomey recently said that Obama’s agenda is so scary that “there’s a real danger that capitalism is going to go on strike, because the capitalists don’t know what the government is going to do next.”) With today’s GOP jeering its moderates and pushing away sympathetic independents, Toomey has a winning profile. Specter switched parties to save his skin (reportedly making a deal that the Democratic Party would support him and no one else in the primary). Though Specter says he will be no rubber stamp, it will now be easier for Democrats to overcome Republican filibusters.

All this has happened before. On November 9, 1994, a day after the Republicans gained control of both the House and the Senate for the first time in decades, Alabama Sen. Richard Shelby switched to the winning side, giving the GOP 53 votes in the upper house. By the end of the next year, five House Dems and Colorado Senator Ben Nighthorse Campbell had also become Republicans.

Could party-switching become contagious again? Specter’s switch reduces the influence of Maine Republicans Olympia Snowe and Susan Collins, who each voted for the stimulus package and who represent a state that went dramatically for Barack Obama in 2008. Once Al Franken is sworn in as the Dems’ 60th vote (probably sometime in late summer), the administration will have less need for Collins and Snowe when it comes to getting around a filibuster. They’ll just have to worry about keeping their own moderates in line.

In his statement on Specter’s switch, Harry Reid, the Senate majority leader, said he “welcomed” Specter’s “moderate voice” to the Dems’ “diverse caucus.” That seems, by some lights, an open invitation to Specter’s fellow moderates Collins and Snowe. They might find it more attractive to serve in the Senate as members of the Democrats’ powerful “moderate” bloc instead of serving in an almost-powerless Republican minority that stands a good chance of losing members in 2010.

The big difference between the Maine senators and Specter, however, is that he faces an election next year. Snowe’s term is up in 2012. Collins isn’t up until 2014, but are either willing to spend more years in the shadows after having once served in the majority? The temptation to join the party in power might prove too strong.