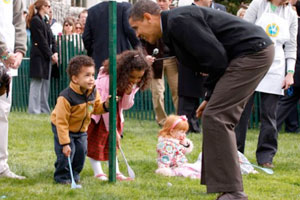 The main difference between a Bush administration Easter egg roll and the Obamas’? Equal opportunity to throw up on the White House lawn. For the first Easter egg roll of the Obama presidency, the First Family distributed several thousand tickets to DC public schools, ensuring that the enormous crowd on the White House lawn was among the most diverse in modern history, and also the largest. (The White House gave out 30,000 tickets in all.) It wasn’t an entirely terrible consolation prize to the school system that the Obamas rejected for their own kids.

At 6:30 a.m. this morning, my little DC neighborhood elementary school sent a small fleet of cheese buses down to the Ellipse to join the fray. We took off with the excitement of people who’d won the lottery, only to arrive at the scene with 6,000 other people who’d also hit it big. Not only did the Obamas invite local school kids, but they offered tickets to the rest of the country to ensure that the egg roll was no longer an exclusive event for Washington insiders and those willing to camp out overnight in the rain. All that democracy, though, meant a lot less egg rolling and a lot more standing in line. This year, black kids, white kids, kids from Alaska, kids from Anacostia, kids with two mommies, kids with no mommies, all had multiple, if not unique, opportunities to stand in line and freeze together in the shadow of the White House.

They stood in line to catch Ed Sec Arne Duncan reading “Clifford Goes to Washington,” a story that didn’t last as long as the line to hear it. My 5-year-old companion and I stood in line to see the White House chefs make lunch. We gave up before we made it to the table full of organic salad greens but not before seeing one poor kid barf on the lawn. We hoped he’d recover in time to stand in line for yoga, one of the sports themes of the day designed by Michelle Obama to encourage healthy habits. There were lines to have your picture taken next to a giant egg; lines to roll eggs; lines to find eggs; lines to jump rope and kick soccer balls. Remarkably, the only place there wasn’t a line was at the bathroom, which was amazingly luxe. Apparently at the White House, even the porta-potties must meet high standards, as they featured porcelain fixtures and running water.

We did witness a fairly exclusive concert by Fergie, who wore white gloves for the occasion and whose big hit “Fergalicious” was only slightly too risque for the pint-sized audience. But for all the line-standing, we never did see the Obamas, who appeared after most of the DC public school kids got shown the door at 9:45. Without seeing a single member of the First Family, we were herded into another big line to exit the White House grounds and collect our commemorative egg. The White House has made a big deal about how “green” the eggs are this year, what with their vegetable-ink dye and sustainable hardwood. But the Obama green ethic clearly hasn’t yet trickled out to the rest of the government. Park Service-contractor Legg Mason Guest Services peddled hot chocolate just outside the White House gates this morning—in Styrofoam cups.

Other observations: The official egg roll program cover art featured a painting by a student from the Two Rivers charter school in DC. The school made 19 submissions to the White House and Mrs. Obama picked the winner from those. While President Obama has been a vocal supporter of charter schools, it seems odd that he’d give Two Rivers such a prominent role, nice as the artwork is. The school was founded in 2004 by a bunch of white people on Capitol Hill, for their own kids, in a move that suggested exactly how charter schools might be used to resegregate the public school system. When it opened, Two Rivers was 45 percent white, 40 percent black and 15 percent Asian and Latino. That’s about as white as you can get in a school system that’s more than 80 percent black. Critics filed a lawsuit against the school after it opened alleging that it had engaged in discriminatory admissions procedures to ensure a higher yuppie contingent.

Still, compared with the last administration, it’s nice to see the occupants of 1600 Pennsylvania at least acknowledge the residents of the District and their public schools, yuppie or not. The kids who came to the White House at the Obamas’ bidding left exhausted, frozen and hungry, but their parents and teachers took enough pictures to remind them someday that all of that standing in line was, in fact, a pretty big deal.