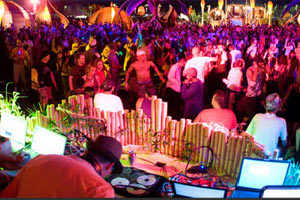 While the three nightly headliners (McCartney, The Killers, and The Cure) have all dabbled in studio trickery and electronics to accompany their guitar-centered tunes, straight-ahead electronic music has really taken center stage this year at Coachella. The fact that organizers seem to understand electronic music and appreciate its potential for quality live performances has always made the festival a step up from your Bonnaroos and Bumbershoots, but the 2009 lineup is even more electro-riffic: fully 53 of the 133 artists could easily be considered “electronic” (that’s including the Yeah Yeah Yeahs). After the jump, 10 of the highlights.

Plus, don’t forget, Mother Jones is, surprisingly enough, your home for complete Coachella coverage! We’ll have the traditional nightly updates right here on the Riff Friday through Sunday (reminisce about 2008’s festival here, here and here, and 2007’s here, here and here), as well as some chats with whatever artists we can corral, plus a selection of intrepid photographer Kristi’s best shots from the photo pits and lunch tents! Weather.com says 89-95-98 for highs, so if you’re heading to the desert, stay cool!

Hey, look at that, my favorite Buenos Aires nightclub is getting transferred to the desert for a day! Their fuzzy, remixed version of the traditional cumbia style is starting to supplant reggaeton as the latin dance-floor music of choice, and even though they’re on at 1pm on Saturday, the languid beats will fit right in with the heat.

This French producer is lumped in with his compatriots Justice and DJ Mehdi, but his productions are often quirkier and stranger, and seem to reference a wider array of dance music history: “White Knight” updated the Detroit techno sound of Inner City, and “Next of Kin” is a jittery reimagining of starry-eyed new wave. What he does live, I have no idea.

The Australian duo has gained a reputation as the harder-edged cousins of their dance-rock countrymen Cut Copy, and their live shows often have the noisy, ecstatic cacophony of a punk show. While their last album came out a year ago, they’ve been touring a ton, and their performance Friday night should be a highlight.

The Presets – “My People”

I’m lumping this British band in with the electro section even though their sound often has the blissed-out sound of filtered guitars, like My Bloody Valentine, because at other times they delve into angular dance-rock a la The Rapture. Will their attempt to marry both sounds into a coherent whole work at 2pm on Sunday? We shall see.

MIS have a new album out now called Soy Sauce, and I couldn’t find any embeddable clips, but its sound is even more wildly diverse than the notoriously eclectic combo’s previous work, swinging from acoustic ballads to thumpy techno to shuffly cumbia. There’s like a 10% chance I’m getting to the festival by 12:45pm on Sunday to see them, but hey, a guy can dream.

This loosely-definied Portuguese “soundsystem” has singlehandedly made popular the kuduro sound, a hard-edged, intense flavor of dance music with Angolan roots. Wikipedia says “Kuduro” means “stiff bottom,” referring to the posterior-protruding dance which is apparently best suited for the frenetic, stomping beat. If that’s not music that’s meant for hot-weather dancing, I’m not sure what is. Plus, can we expect a guest appearance from M.I.A.?

This Brazilian producer on a German minimal techno label made one of my favorite albums of 2007, and his new CD Take My Breath Away, with its darker sound and nods to artists like Kraftwerk and New Order, may be an even greater achievement. He takes great pains to proclaim he doesn’t “DJ,” he performs, using a laptop and various controllers; will the subtleties of his intricate tunes get lost in the crowd?

Gui Boratto – “No Turning Back”

Okay, sure, this Toronto duo is like hipster crack (or should I say cocaine), and asymetrical haircuts stampede to the club at the very mention of their name. Their artist albums are disappointingly uncentered, pale imitations of their pounding remix work, exposing their lack of songwriting chops. But member Jesse Keeler used to be in Death From Above 1979, who were spectacular live, and he brings this intuitive understanding of creating a compelling performance to MSTRKRFT’s live shows and DJ sets.

Your pathetically-named DJ was pilloried for being slightly underwhelmed by the new album from Karen O and crew, and after a little more listening, he admits that maybe he was about 10% off. The new wavey material is often hypnotic and soaring, although I still maintain it doesn’t hold a candle to the face-melting blast of “Date With the Night.” Don’t hate me. They’re on the main stage right before good old My Bloody Valentine and The Cure, and that’s a power trio right there.

So, Maya, do anything in the last year? Have any 10-month-old songs suddenly rocket to Ace of Base-level ubiquity thanks to a stoner movie commercial? Perform at any awards ceremonies? Reproduce? Now that you’re at the level of “suitable replacement for Amy Winehouse,” we’re all wondering: will you maybe start doing a live show that isn’t just, you know, walking around as Diplo or whoever plays some records? Not that we haven’t loved that, indeed, multiple times. But it’d be nice to see you interact with, say, a drummer. Imagine! I know you’ve been busy, but you’re on that giant main stage at 9pm Saturday, and a spectacular performance could be, you know, a big deal. But hey, if you just want to sing along to some records, that’s fine too.