Welcome to night two of Mother Jones‘ blanket coverage of the Coachella Valley Music and Art Festival! In tonight’s exciting edition: Oodles of star sightings! Endless traffic jams! A major cancellation! And apparently M.I.A. reads the Riff! It’s 2:00 a.m. and we’ve just made it back to our lovely rental crib, so my apologies for poorly grammar, nonsensical metaphors like palm trees on fire, or sentences that don’t. Click “more” only if those things don’t matter to you.

Speaking of our rental pad, it’s always a struggle for those of us who grew up in a cold climate to leave a house with a pool, so I suppose it’s forgivable we didn’t get to the venue until about 4:00, missing the Zizek boys and Blitzen Trapper. Alas. On arrival, we wander to the dance tent where French DJ Surkin is playing for a surprisingly large crowd. He’s mixing up quirky contemporary electro with classic rave, complete with big happy piano chords and silly police sirens. His basslines bubble and squirt, and he seems to be having a great time, holding his hands out to the crowd like, “Don’t you love me?” And everybody does. 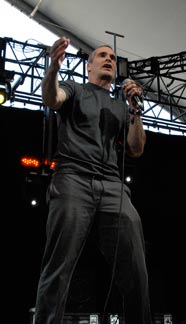 One tent over, Henry Rollins is saying stuff. As we approach, I hear “I was in Amsterdam a while back, and they have weed and prostitutes, and yet, nothing’s on fire!” Everybody cheers. People like hookers and pot. Suddenly he segues to something about Sarah Palin, then he’s on to the Iraq war, and how he met some injured veterans, whose injuries he describes graphically, and then talks about meeting actual foreigners who turn out to be nice. “War, it’s a scam,” he says, then qualifies, “I’m not putting down the military.” It’s so utterly self-serving, annoying, cheap and useless that I briefly consider becoming a Republican, until I remember they have way more of that stuff on their side.

We flee for a cold drink, and then return to the same tent where hotly-tipped Scottish combo Glasvegas are set to perform. But what’s this? A man emerges onto the stage and says he has an announcement. “Glasvegas had to cancel, they’re sorry, but the lead singer is sick, like, hospital sick.” Apparently someone in front yells out angrily, because he then goes on a sarcastic tirade: “Oh, yeah, like it’s my fault, like I had TB and went and made out with him.” Huh?! Someone doeth protest too much! Either way, a huge disappointment.

We walk dejectedly back to the VIP corral, and our spirits are immediately lifted by exiting star sightings! Right next to us, Zac Efron and Vanessa Hudgens. I know!!! Reports then start coming in from friends: they’ve seen Jared Leto, Paris Hilton, Kate Bosworth, Danny and Chris Masterson, Seth Green. A veritable cavalcade of stars! Unfortunately, before we can convince them to take us back to Hollywood with them, we have to run and catch TV on the Radio. 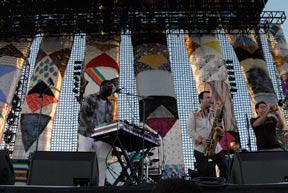 They emerge in front of a crazy backdrop consisting of what looks like long homemade quilts in bright graphic patterns, and the whole stage has colorful swatches here and there. It’s oddly appropriate to their diverse, rich music, and they’re totally on, as usual. “Crying” gets enhanced by a thick, synthetic bassline, that feels like it might be strong enough to wake up the nearby San Andreas fault. Singer Kip Malone asks the crowd in a funny voice, “Who are you here to see? Theivery Corporation? They’re playing after us, give it up.” I think he might be having a laugh. They launch into “Wolf Like Me,” and it’s ecstatic, cathartic, and I’m reminded why I come to this crazy, dusty festival. For a brief moment I don’t even mind the hippies dancing wildly in front of us.

Speaking of hippies, the less said about the supremely annoying Thievery Corporation the better. There was really nothing more interesting going on at the time, and we were tired, so we sat through their set of generic reggae-tinged trip-hop. They bring out Perry Farrell to sing a number, making this officially his 10th appearance at the festival. The song is, of course, terrible.

Finally, around 9pm, a giant crowd is converging at the main stage for M.I.A., and the DJ 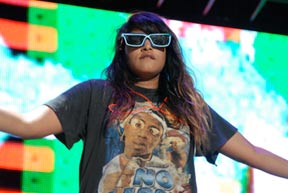 comes out to hype us up. A video of protesters carrying anti-M.I.A. signs plays on the big screen, and finally, the lights come up, an air horn sounds, and a troupe of dancers, their clothing outlined in fluorescent glowing threads, step up from behind the stage and fall into a breakdance-y groove. Finally, M.I.A. herself emerges and steps up to a microphone-covered podium with a glowing logo, as if she’s giving a press conference, and launches into “World Town.” On the left of the stage, two percussionists are banging various instruments. In other words, my dream for her set has come true. What the hell, is she spending time on the Riff while watching the baby? The stage is a riot of color and movement, and dancers are throwing little plastic horns into the audience so we can join in. After a few cacophonous numbers, things calm down, and M.I.A. chats with us. “They tried to make me do the Oscars, and I said, ‘no, no, no’,” she sings, in the key of Winehouse, a not-so-subtle reference to the performer she’s replacing. Throughout the set, she continues to bristle against her near-headliner status, finally lamenting she wasn’t “back in the tent with the sweat,” and bringing a crowd of audience members up on the stage with her. It’s an exciting, if scattershot, performance, and one can only wonder what she might have put together if she hadn’t just given birth a few weeks ago. 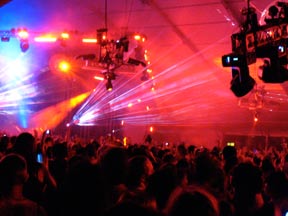 Off we go to the dance tent where the Chemical Brothers are DJing. This is a band I’ve seen probably 20 times, and I love them, but they’re playing noodly, minimal records, and the crowd wants bangers. Their segues and mixes seem mistimed, petering out right when they should build to a climax, and the crowd tries their damndest to cheer them on, but to no avail. It’s almost depressing, but I get the sense they didn’t really care.

Back on the main stage, the Killers are getting started, but we’re sticking around for electro duo MSTRKRFT, who have kept a respectably large crowd for their set. They kick off with a quick blast of hits, from a taste of “B.O.U.N.C.E.” to “Easy Love,” mixed in with quick samples of Run-DMC for good measure, and the crowd of hoodied and glowstick-waving kids is lapping it up. After a few samey-sounding builds and noisy but aimless tracks, though, I start to miss the good old Chems, back in the early days.

I’ll spare you the details of the various mishaps and screwups that led to our late arrival at our car, in a parking lot with one tiny exit, and the abject horror of sitting in that car for an hour in a line of other cars that wasn’t moving. Oops, did I just include you in the details of the horror? Sorry. Either way, what to my mind was the weakest day of the festival turned out alright, with newly main-stage worthy acts stepping up to the plate. Tune in tomorrow for the final night, when we’ll learn: Just how fat has Robert Smith gotten? Does My Bloody Valentine lose their charm when heard under palm trees? And is there any way in hell we’re getting there in time for the 12:45pm performance from Mexican Institute of Sound? Plus, on Monday, we’ll have more pictures to look at, so stay tuned. But now, it’s 3am, and I gotta get in the hot tub.