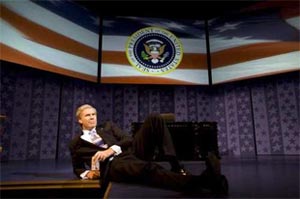 Usually, I’m fine with the idea of nonsense for the sake of nonsense. From Monty Python to Aqua Teen Hunger Force, the random and ridiculous can often reach ecstatic comedic heights. On the other hand, sometimes comedy can be the best weapon against hypocrisy and villainy, as Jon Stewart’s hilarious and vital takedown of CNBC made clear this week. So it should be the perfect formula: the usually-hilarious Will Ferrell brings his smirking imitation of the just-barely-former president to Broadway in “You’re Welcome America: A Final Night with George W. Bush,” the final show of which was broadcast by HBO last night. Unfortunately, Ferrell’s 90 minutes of Bushy bumbling missed the mark, both as silliness and as satire.

Tellingly, the first big (or, well, average-sized) story to emerge from Ferrell’s Broadway run was pure shock value: the Times reported last month that audience members had “stormed out” after seeing a photo of a penis projected on a screen. While the Times‘ breathless reporting on this issue was actually pretty funny in and of itself, the moment turns out to be oddly symbolic of the entire show’s caterwauling randomness, a “just because I can” stunt with an easy “stimulus package” joke. This “ultimate” exposure could be an attempt to get at something central and pathetic about W., but it just feels kind of empty.At its best, Ferrell’s humor has aimed for sublime nonsense. His best SNL and movie moments featured ridiculous setups pushed beyond their utterly bonkers conclusions—a kind of vertigo of silliness. “You’re Welcome America” relies heavily on this kooky style, portraying Bush trapped in a mine shaft, mistaking a 4-way for a 3-way, spending a year living with a man in a Vermont cabin. But the show tries to have it both ways, setting aside the truly devastating horrors of the past eight years for the goofy bits, then plummeting back to sickening reality, illustrating a man truly overwhelmed with the pressures of the office. Even Condoleeza Rice, whose outdated concept of foreign policy caused untold calamity, is wasted on a sleazy dance number, a comedic concept that has a whiff of racism about it. And don’t get me started on the maddeningly stupid breakdancing Secret Service officer.

Ferrell’s Bush impression was hilarious in two- or three-minute bursts of mispronuncifications on SNL, but it’s a tactic that seems destined to fail in a longer form. Without comparing Bush to the German dictator, of course, Monty Python’s old Hitler sketches showed the Fuhrer in ridiculously diminished surroundings (like a Somerset guest house), but these bits were quick and immediate, in and out by the time the shock of the contrast wore off. In “You’re Welcome America,” the nonsense lasted too long, and the serious bits felt guiltily imposed and self-conscious. Ultimately, mocking Bush for 90 minutes is still focusing on Bush for 90 minutes, and future comedies about this dark period in our politics will have to wrestle with that central problem: how to skewer this most infuriating figure without diminishing his heinousness or elevating his banality.