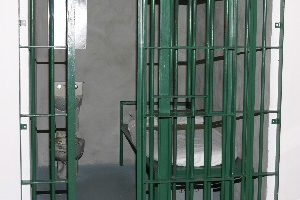 There are three levels of solitary confinement at Angola Louisiana State Penitentiary: “Closed Cell Restricted,” “Camp J,” and “the hole.” Herman Wallace, Albert Woodfox, and Robert King Wilkerson have experienced them all.

CCR: “Closed Cell Restricted” is known as “extended lockdown” in official Angola parlance. Angola CCR cells contain a bed platform against one wall, a steel combination-sink-and-toilet unit against another, and only a few feet in between. Penal historian Burk Foster notes that until recently the condemned had more privileges—including access to television—than inmates relegated to CCR. By many accounts, death row is a more comfortable place to be locked up. CCR is where Wallace has spent his days for most of the last 36 years. Placement in CCR was originally used as a temporary punishment, but Wallace, Woodfox, and Wilkerson’s experience with CCR has been anything but temporary.

CAMP J: In 1998, Harry Connick Jr., (whose father, Harry Connick Sr., was the Orleans Parish district attorney for 30 years) was escorted into Camp J in leg irons and handcuffs. He had asked to spend three days in solitary as research for a role in a film, but lasted just the first night in Camp J before he asked the warden to let him out.

Camp J is a “punishment camp,” and the second level of solitary at Angola. Here, inmates are not permitted to have personal belongings, apart from law and religious books and basic toiletries. The food is notoriously inedible—usually made up of leftovers from the main prison cafeteria mixed together and baked into an amorphous “loaf.” Inmates frequently strip naked and lie on the cement floors to keep cool during the long, humid summer days; in the winter, the cells can be frigid. Suicides are an ongoing problem. In the book God of the Rodeo, Daniel Bergner described how inmates cobbled together crude cannons to rifle streams of diluted feces at one another from their toilets. In 2000, death row inmate Abdullah Hakim El-Mumit sued the prison to be returned from Camp J to death row, saying conditions in the punishment camp were worse than in the death house and thereby unconstitutional.

Wallace has been sent to Camp J for a number of infractions. Once, he says, a guard mistook the metal pocket clip from his ballpoint for a “shim,” or handmade handcuff key. Later he was sent to Camp J for destruction of public property, allegedly because a guard found a scratch on his light fixture. There are three levels of Camp J; inmates generally start at Level Two and work their way up to Level Three—with good behavior—and can be out in six months. Getting busted down to Level One means months more effort to earn your way out. Between 2001 and 2003, Wallace was busted down to Level One repeatedly, although his record shows no serious behavioral infractions.

Camp J’s predecessor—the Red Hats—derives its name from the straw hats dipped in red paint that identified inhabitants of the cell block when they were working in the fields. Men who survived Red Hats told of a dungeon crawling with rats, where dinner was served in stinking buckets splashed onto the floors. Reforms in Louisiana led to the Red Hats cell block being condemned and closed in 1972. Camp J took its place in 1977 as the worst spot on the 18,000-acre prison grounds in which to find yourself.

THE HOLE: The worst solitary at Angola is called the “dungeon” or “hole” by inmates and “administrative segregation” by officials. Here, inmates are held to await disciplinary hearings. A recent offense that landed Wallace a blanketless overnight stay in the hole: gifting a pair of earrings and a poem about solitary confinement (unflattering to the prison) to his lawyers during a legal visit. He was cited for possessing contraband. Later, the charges were dropped, and he returned to CCR.