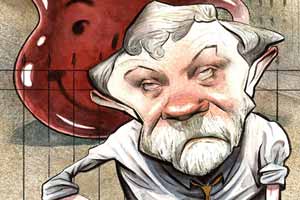 Last week when I posted a Geithner Kool-Aid toon here, little did I think the Jello theme would be what was needed the next day for a Newsweek cover story on Krugman. Amid Capeci didn’t know exactly what the piece would say but wanted a take in which Krugman was being ignored by the White House, out of the loop, regardless of his importance. Perhaps that Krugman hadn’t “drunk the Kool-Aid” of Wall St., as Amid put it. So here’s the result, with one of the best layouts my work has ever been given. Here’s some of what Evan Thomas says in the piece:

In his Times column the day Geithner announced the details of the administration’s bank-rescue plan, Krugman described his “despair” that Obama “has apparently settled on a financial plan that, in essence, assumes that banks are fundamentally sound and that bankers know what they’re doing. It’s as if the president were determined to confirm the growing perception that he and his economic team are out of touch, that their economic vision is clouded by excessively close ties to Wall Street.

If you are of the establishment persuasion (and I am), reading Krugman makes you uneasy. You hope he’s wrong, and you sense he’s being a little harsh (especially about Geithner), but you have a creeping feeling that he knows something that others cannot, or will not, see. By definition, establishments believe in propping up the existing order. Members of the ruling class have a vested interest in keeping things pretty much the way they are. Safeguarding the status quo, protecting traditional institutions, can be healthy and useful, stabilizing and reassuring. But sometimes, beneath the pleasant murmur and tinkle of cocktails, the old guard cannot hear the sound of ice cracking. The in crowd of any age can be deceived by self-confidence, as Liaquat Ahamed has shown in “Lords of Finance,” his new book about the folly of central bankers before the Great Depression, and David Halberstam revealed in his Vietnam War classic, “The Best and the Brightest.” Krugman may be exaggerating the decay of the financial system or the devotion of Obama’s team to preserving it. But what if he’s right, or part right? What if President Obama is squandering his only chance to step in and nationalize—well, maybe not nationalize, that loaded word—but restructure the banks before they collapse altogether? 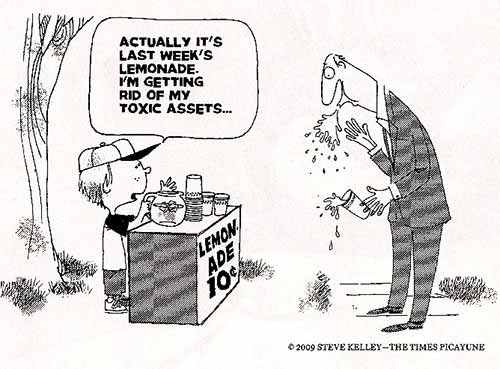