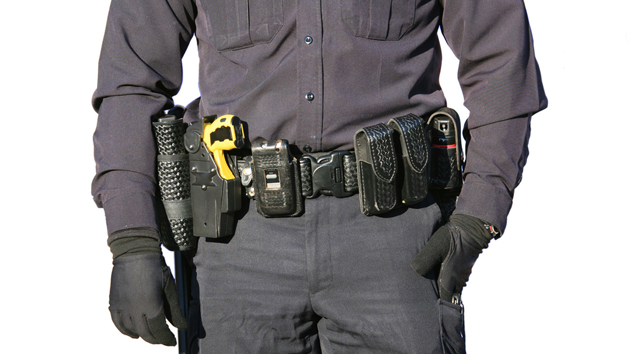 By all accounts, Patrick Lee was having too good a time at the Mercy Lounge, a Nashville rock club. He’d commenced the September 2005 evening by dropping a few hits of acid. Before long, the 21-year-old was tripping and determined to climb onstage. A bouncer eighty-sixed him and called the cops, who, according to witnesses, found Lee outside the club, babbling incoherently. Things went downhill fast. Lee made a move toward an officer and was hit with pepper spray. He ran a few feet and stripped off his clothes. The cops deployed their Tasers­, jolting Lee 19 times in all. By the time paramedics arrived, witnesses say, he was unresponsive. He died 39 hours later. The cause, a county medical examiner concluded, was “excited delirium.”

For the past five years, this has been a common conclusion in deadly incidents involving Tasers, and the nation’s top seller of electric stun guns prefers it that way; Taser International Inc. has twice sued medical examiners who cited its products as a contributing factor in a subject’s death. At the same time, the company aggressively promotes awareness of excited delirium, an ill-defined condition that helps it fend off lawsuits. Thanks partly to testimony from a cast of ED proponents, several with financial ties to the company, Taser has lost just one wrongful-death case at trial out of 33 filed against it since 2001. (Dozens more lawsuits are pending.)

Taser’s lone courtroom defeat, which it may appeal, involves Robert Heston, a California meth user who died after 25 jolts. Last June, the family’s lawyers convinced a jury that Heston most likely died not of ED, but rather of cardiac arrest due to metabolic acidosis—a temporary state in agitated individuals that may be exacerbated by excessive Tasering, recent animal studies indicate. But in January, a suit by Patrick Lee’s parents was dismissed after Taser argued that excited delirium was the culprit. “We look at excited delirium as a responsibility-shifting mechanism,” says Peter Williamson, an attorney for the Hestons. “It’s a way for the police department, the officer, and Taser to shift responsibility to the victim.”

“People are looking for an explanation for some of these deaths, and this syndrome provides an answer that’s convenient.”

The company insists its devices never kill, but Amnesty International, the only organization to have compiled data on the issue, says there have been 334 fatalities following Taser jolts since 2001. In 69 of these cases, autopsy reports specifically cited ED as a cause of death.

“Of all in-custody deaths [not involving firearms], excited delirium syndrome is the most common form,” notes Vincent Di Maio, a Taser expert witness, retired Texas medical examiner, and coauthor of the 2005 book Excited Delirium Syndrome: Cause of Death and Prevention.

But as a medical condition, the term is meaningless. “We have no idea what any of the causes are, what the biology behind it might be, what underlies it, how being in this state leads to death with supposedly some intervention with a Taser or other force,” says Matthew Stanbrook, a faculty member at the University of Toronto medical school.

Purported ED signs range from “bizarre” behavior to sweating and high body temperature, attraction to shiny objects or glass, foaming at the mouth, a penchant for disrobing, aggression, and superhuman strength. Such symptoms could result from “alcohol withdrawal, acute schizophrenia, bipolar disease, stimulant drug intoxication, psychological illness plus stimulant drugs, hypoglycemia, an infection of the brain. I could go on,” says Christine Hall, a Canadian ER physician who researches in-custody deaths.

“The bottom line is this,” says Andrew Dennis, a Chicago surgeon, part-time police officer, and medical researcher who coauthored three studies of Taser’s effects on swine. “You have a lot of people who are acting psychotic, and often law enforcement is asked to deal with them. Some subgroup of this population is going to die, and we don’t know why. This potential at-risk group is the quote-unquote excited delirium group. But there are no common threads to identify this at-risk group. As far as I’m concerned, everything discussed about excited delirium is conjecture.”

None of these concerns have stopped Taser from talking up ED in training sessions, literature, and court filings. The company attends conferences for police chiefs and medical examiners, where it distributes ED-related literature, and has doled out free copies of Di Maio’s book. It also sends unsolicited materials to medical examiners when an in-custody death occurs in their jurisdiction. In 2002, Taser released a statement for police to use if someone died in a Taser-related incident. “We regret the unfortunate loss of life,” it begins. “There are many cases where excited delirium caused by various mental disorders or medical conditions, that may or may not include drug use, can lead to a fatal conclusion.”

A nonprofit that trains police officers about excited delirium was cofounded by Taser’s national litigation counsel.

The expression first appeared in medical documents in the 1800s, and for a time it was associated with deaths in asylums. It fell into disuse during the 1950s and was revived in the 1980s, essentially to describe the agitated state of cocaine addicts. Since then, ED has been the subject of dozens of articles aimed at law enforcement. (Among the authors are Jeffrey Ho, an ER doctor whom Taser pays to conduct studies and testify—he got $70,000 during a recent 12-month stretch—and Mark Kroll, a member of Taser’s science advisory board who has cashed in at least $2.5 million in company stock options.)

The term has also gained traction among medical examiners and coroners. “People are looking for an explanation for some of these deaths,” notes Stanbrook, “and this syndrome provides an answer that’s convenient.” (In an unpublished survey last year by a national medical examiners group, 67 of 187 MEs said Taser’s litigi­ousness would affect their conclusions in cases involving stun guns.) Last October, prompted by the term’s growing popularity in law enforcement, the American College of Emergency Physicians resolved to study whether ED should be considered as a diagnosis.

Several people I spoke with credit Taser for helping popularize excited delirium. Dennis, the surgeon-cop, first heard the term, he says, at a company training session five years ago; Shao-Hua Lu, a psychiatrist who treats addicts at Vancouver General Hospital, hadn’t heard of ED before 2007, when he began working on a Canadian government probe of Taser safety. “No [practicing] medical doctor would write down ‘delirium’ on a death certificate as a cause of death,” says Lu, who trains Canadian Mounties to identify mental health problems, including various forms of delirium, in their subjects. “I don’t understand why MEs would write that.”

Taser insists that any corporate outreach involving ED relates to safe use of its products. “We don’t teach anything about excited delirium,” says spokesman Steve Tuttle. “We let law enforcement agencies know that they need to be aware of it.”

But the company is remarkably tight with America’s foremost ED training and advocacy business. The Institute for the Prevention of In-Custody Deaths (IPICD) was cofounded by police trainer John Peters and an old acquaintance, Michael Brave, Taser’s national litigation counsel.

At the time, Peters later stated in a deposition, he was reworking his firm’s training regimen after hearing from other stun-gun merchants. “Some of the manufacturers said, you know, ‘[Police departments] are paying out lots of money in these lawsuits, and it’s hurting us because they don’t have money left over to buy our product.'”

“These guys want to help the police stop killing people, and they’re trying to build a liability defense for when they do.”

In 2005, Peters filed corporate papers for the ipicd listing himself and Brave as the founding directors. Within six months, the institute was leading eight-hour sessions at Taser’s Scottsdale, Arizona, compound, teaching cops to recognize ED and often touting Tasers as the most effective tool for subduing agitated individuals. In the first two years, Brave estimated in a deposition, Taser paid $70,000 to $80,000 for the sessions. To date, Peters says, the IPICD has certified some 10,000 officers worldwide as in-custody death prevention instructors.

Taser also pays the way for Peters and IPICD instructor David Berman to speak at outside conferences, directs business Peters’ way, and helps plug the IPICD‘s annual conference in Las Vegas, where past presenters have included Taser-backed researchers and employees. A flyer for last October’s three-day shindig, which drew 250 attendees, promised the “historic” opportunity to help form a “general consensus about excited delirium that will then be published in leading medical, legal, and law enforcement journals.” As an expert witness for Taser, Peters charges $5,000 plus $2,750 per day; in 2007, he was paid about $42,000.

Peters sees nothing inappropriate about his Taser connections. “We are not aligned with them at all,” he says, although “we did not distinguish ourselves enough” at the start. (Brave, now listed as an inactive director, says he remains a legal adviser at IPICD.) In any case, the institute will continue in its quest to entrench ED as a medical and psychological diagnosis, Peters says, “to quiet these folks” who don’t believe it exists.

These folks include Heston attorney John Burton, who, not surprisingly, finds the IPICD/Taser bond problematic. “These guys want to help the police stop killing people, and they’re trying to build a liability defense for when they do,” he says. “The two things are in direct conflict.”

Brave, for his part, has nothing but contempt for the company’s critics. “How much more damage are we going to do to police officers by continuing to put forth this ignorant rhetoric?” he asks. “A druggie’s mommy hires a plaintiff’s attorney, and now we need to blame someone. Do we blame the person who sold them the drugs or the mommy who let them take the drugs or the kid who actually took the drugs? No. We blame the police and Taser, because they were present at the time of death.”