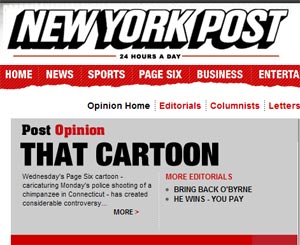 The New York Post has posted an apology for the Sean Delonas cartoon picturing a chimpanzee being shot for writing a sloppy economic stimulus bill. The Post‘s editorial said that the cartoon was meant to “mock an ineptly written federal stimulus bill,” but that it seemed to have unintended consequences:

[The cartoon] has been taken as something else – as a depiction of President Obama, as a thinly veiled expression of racism.
This most certainly was not its intent; to those who were offended by the image, we apologize.

However, there are some in the media and in public life who have had differences with The Post in the past – and they see the incident as an opportunity for payback.

To them, no apology is due.

Cute—anyone who’s ever disagreed with the Post doesn’t get to accept the apology! Dammit!

The cartoon generated significant controversy, and here on the Riff, Daniel Luzer’s defense of it as “just a joke about monkeys” was picked up by Gawker, who pointed out that even “lefty magazine writers” didn’t think it was racist. Well, in this humble MoJo contributor with a terrible DJ name’s opinion, the cartoon probably wasn’t intentionally racist, but it sure turned out that way: using a singular chimp to represent plural stimulus bill authors was sloppy symbolism, at best, and with the president taking ownership of the bill, it’s only natural readers took it as a knock on Obama. Gawker, bless their hearts, also pointed out that Delonas has a long tradition of terrible, unfunny, and offensive drawings: a “rich history” of “hate,” in fact, including such hilarious pieces as the good old “gay marriage leads to sheep marriage” classic, and the brilliant observation that big-nosed Muslim terrorists were really stoked about Democratic wins in the 2006 elections. Comic genius!

More than anything, what strikes me about Delonas’ cartoons is their profound ugliness: they’re scratchy, jerky, and overworked; people are spotty, leering and malformed; and his all-caps lettering leans and swerves like a ’60s Fillmore poster. Even The Onion‘s great editorial cartoon parodies, with their layers of hilariously inconsistent visual metaphors, are straightforward in comparison. It’s clear Delonas is sick enough to revel in the attention his pathetic scribblings have inspired; let’s hope the Post is able to see the controversy for what it is: an outcry at awful work.