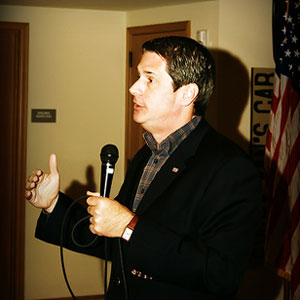 Republican Louisiana Sen. David Vitter made a trip to DC’s Chinatown on Thursday to nibble on kung pao chicken and rally the conservative troops. Addressing the DC lawyers chapter of the conservative legal group, the Federalist Society, Vitter got right down to red meat. After quoting comments from President Obama suggesting that he’d like his judicial nominees to be able to empathize with the downtrodden, Vitter declared that demanding empathy in a judge was something you’d expect in a “dictatorship.” How empathy equates with repressive rule, Vitter didn’t really explain, except to say that it had little to do with ensuring checks and balances on an imperial government. (Vitter also claimed–and it was hard to tell if he was joking or not–that he routinely walks from the Senate to the House of Representatives to use the apparently more populist House water fountains, instead of imbibing the stuff the Senate is drinking these days.)

But Vitter didn’t really come to Tony Cheng’s to discuss judges or the Constitution. His talk, entitled “Defending Conservative Principles in the Senate,” was mostly a complaint about the economic stimulus bill that his Senate colleagues were poised to pass without his vote or the votes of most Republicans. According to Vitter, his party was having a come-to-Jesus moment over the stimulus package, which had provided the minority party an opportunity to rediscover its mantra of smaller government and lower taxes.But it was hard not to wonder whether “Diaper Dave” is really the guy to be making the party’s case for embracing conservative values. You’ll recall that back in 2007, he admitted to calling the prostitute ring run by the infamous DC Madam, the late Deborah Jeanne Palfry. (The ensuing media digging into his alleged patronage of a New Orleans brothel also produced reports suggesting the junior senator had a diaper fetish, hence the nickname.) But the Federalists (including several unemployed Bush administration officials networking for jobs) didn’t seem to hold all that against him. They cheered as Vitter hyped his votes against the confirmation of Hillary Clinton, Eric Holder, and Timothy Geithner, and his intention to continue to fight the all-but-done economic stimulus package.

More interesting, Vitter offered up a few specifics about the opposition party’s political strategy given its diminished congressional power. Vitter said defeating the stimulus bill was never the goal; changing public opinion about it was. “We may have lost the vote, but we collectively have won the debate,” he said, claiming that the public now perceived that the bill as evidence that the Obama administration was not bringing real change to Washington, but rather just engaging in the same old wasteful government spending. (Congressional Democrats have been disseminating polls showing that the stimulus plan is backed by a majority of the public.)  “We’re getting back to our roots,” Vitter said of congressional Republicans.

According to Vitter, the GOP is basically betting the farm that the stimulus package is going to fail, and the party wants Democrats to go down with it. “Our next goal is to make President Obama and liberal Democrats in Congress own it completely,” he said. Instead of coming up with serious measures to save the economy, the party intends to devote its time to an “we told you so” agenda that will include GOP-only hearings on the bill’s impact in the coming months to highlight the bill’s purportedly wasteful elements and shortcomings.

While Vitter seemed to think this was a brilliant new political tactic, voters might be less enthusiastic than Federalist Society members about politicians who spend the next 18 months rooting for the economy to get worse, just to prove a point. But, in Vitter’s world, that’s the price you apparently have to pay for sticking to your principles, call girls be damned.