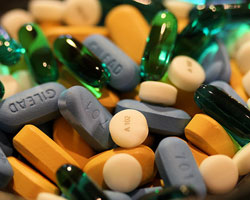 A test case for the new government will be how it deals with the pharmaceutical industry, which rivals the gun manufacturers and tobacco companies for the position of most amoral industry in America.

Democrats have long been promising to stand up to Big Pharma on issues like Medicare drug pricing and importing drugs from Canada, but they’ve accomplished little since they won Congressional majorities in 2006. If they truly want to reign in the drugmakers now that they have the clout, they’ll need to not only move forward on these hot-button issues, but also completely overhaul the Food and Drug Administration, which stands as one of the most corrupt and compromised bodies in the federal government today.

Last week offered a glimmer of hope, with a bipartisan bill aimed at one of the many scurrilous practices employed by drug companies to win swift approval for their products and push them on the public. Called the Physician Payments Sunshine Act of 2009, the legislation was introduced last Thursday by Senators Herb Kohl (D-WI), Chair of the Senate Special Committee on the Aging, and Charles Grassley (R-IA), in the past a rare Republican voice opposing some of Big Pharma’s outrages. They are calling for establishment of “a nationwide standard requiring drug, device and biologic makers to report payments to doctors to the Department of Health and Human Services and for those payments to be posted online in a user friendly way for public consumption.”

Let’s be clear: The proposed legislation doesn’t say that doctors can’t receive money (or expensive dinners, or luxury junkets) while they are testing or endorsing new drugs; it merely says the payments have to be made public. Even this, however, has apparently proven too much for the Food and Drug Administration: A report released earlier this month found that the FDA had been sorely lax in demanding full disclosure of these relationships. As reported by Bloomberg News:

Drug regulators haven’t done enough to force disclosure of financial conflicts of interest among the researchers who conduct clinical trials of medications and medical devices, according to a U.S. government investigation. A total of 42 percent of marketing applications approved by the U.S. Food and Drug Administration were missing financial information that was supposed to be submitted by drug and device makers, according to a report today by the Health and Human Services Department’s inspector general. The FDA didn’t act against the companies, the report said.

Financial connections between companies that make drugs and devices and the doctors and other researchers who test them on humans may compromise the safety of patients in studies and the integrity of the results, according to the inspector general’s report. Lawmakers, led by Senator Charles Grassley, a Republican from Iowa, have raised concern that financial conflicts of interest among doctors and manufacturers may influence prescribing decisions.

The FDA has fallen a long way since 1962, when legendary Senator Estes Kefauver championed its expansion, insisting that it was the federal government’s responsibility to protect the public by ensuring that prescription drugs were both safe and efficacious. The FDA has for decades been playing footsy with the drug industry, and it reached new lows under George W. Bush, as fundamentalist Christianity became yet another force undermining the agency’s work. Bush’s appointments to the FDA leadership included a veterinarian who presided over the Vioxx scandal and stalled the Plan B pill, and a faith-based gynecologist who refused to prescribe contraceptives to married women and advised prayer as a treatment for many female ailments.

In a 2006 survey of FDA employees, more than 40 percent said they knew of cases in which political appointees had interfered with agency decisions. At that time, more than 100 whistleblower cases were also pending at the agency. Some things will now surely change at the FDA–but how much, and how soon?

Obama has yet to announce his nominee for FDA commissioner, but HHS Secretary Tom Daschle talked about the agency at confirmation hearings earlier this month, promising “to ensure that trust in FDA is restored as the leading science-based regulatory agency in the world. …I will send a clear message from the top that the President and I expect key decisions at the FDA to be made on the basis of science–period.”

It’s true that we’re unlikely to see prayer meetings in Tom Daschle’s HHS. But independence from Big Pharma is another story. Since leaving Congress, Daschle has been working as an “adviser” to health care industry clients, including at the law and lobbying firm Alston & Bird. As the New York Times reported at the time his nomination:

Although not a registered lobbyist, Mr. Daschle, a South Dakota Democrat who was party leader in the Senate, provides strategic advice to the firm’s clients about how to influence government policy or actions….As examples of the firm’s achievements the Web site lists matters involving Medicare and Medicaid reimbursements, approvals of federally regulated drugs and medical products, fraud investigations, medical waste disposal, privacy and other compliance issues.

On the day Tom Daschle was nominated, the Washington Post‘s “The Ticker” blog reported:

According to Wall Street, Tom Daschle is a good choice to be the new secretary of the Department of Health and Human Services. Shares of the big drugmakers–Pfizer, Eli LIlly, Merck, GlaxoSmithKline and AstraZeneca–are all trading up from their opening this morning.