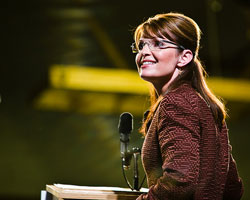 On the night before Barack Obama is sworn in as the nation’s 44th President, his inaugural committee will host a series of dinners honoring public servants it deems champions of bipartisanship. To be feted are Vice President-elect Joe Biden, Colin Powell, and John McCain, whom Obama vanquished last November. At the McCain dinner, the GOP senator, who managed to suppress his bipartisan tendencies during the hard-fought 2008 campaign, will be introduced by one of his closest Senate confidants: Senator Lindsey Graham. But McCain’s No. 1 booster during the last year will not be among those hailing McCain. Alaska Governor Sarah Palin, his controversial running-mate, will not attend the dinner, Bill McAllister, a Palin spokesman tells Mother Jones.

Can true tribute be paid to McCain without Palin’s presence? Picking her for his party’s veep nomination was McCain’s most decisive and significant action of his campaign. And she spent weeks praising him as an American hero, a man the country desperately needed as president. True, the Palin and McCain camps have bickered with each other since the election about some of the campaign’s miscues. But shouldn’t she be part of any celebration of McCain?

According to McAllister, Palin will spend next week in her home state preparing for the legislative session, which begins on Tuesday, and for her State of the State address on Thursday.

Was she even invited? “I don’t know if she was invited,” McCallister says. Don’t know? How could that be? It’s hard to miss an invitation from a presidential inauguration committee. For its part, Obama’s inaugural committee has declined to say whether an invitation was sent to Palin. Repeated phone calls to its press office produced no answer to this simple question.

The committee has announced that the McCain dinner will be held at the Hilton Washington and that Democratic Massachusetts Governor Deval Patrick will be the master of ceremonies. It notes that the attendees of all three bipartisan dinners will include “leaders in Congress from both sides of the aisle and Americans of both parties from across the country.” Just not one particular American from up north.

If Palin was left off the guest list, it’s not clear whether the snub came from McCain or the Presidential Inaugural Committee. But it’s not terribly hard to imagine why she might not make the cut. There appears to be lingering bad blood between the McCain and Palin factions, over such issues as the profligate spending spree to attire the vice presidential candidate and her family (Silk boxers for the first dude?) and the McCain campaign’s botched media roll-out of Palin. The Alaska Governor still appears to be holding a grudge against the McCainiacs, as evidenced by recently released excerpts from her interview with conservative filmmaker John Ziegler, whose forthcoming documentary explores the “media malpractice” that supposedly paved the way for Obama’s election. In the interview, she lashed out at the media, but also criticized her McCain campaign handlers for allowing her to become a campaign punchline in multiple disastrous interviews with CBS News’ Katie Couric.

Given that the McCain dinner will celebrate bipartisanship, not conflict-resolution, perhaps it’s best for Palin to keep her distance. It may be that she and McCain still need some time apart.