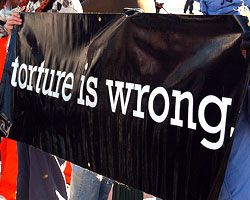 John Yoo, who worked in the Office of Legal Counsel (OLC) in the Bush administration’s Justice Department, became famous for his memos in defense of torture and his theory that the Constitution grants the president almost unlimited power during times of war. (The OLC is the part of the Justice Department responsible for providing legal advice to the executive.) Dawn Johnsen, the woman whom Barack Obama selected on Monday to run Yoo’s old office*, published an article in 2007 entitled “Faithfully Executing the Laws: Internal Legal Constraints on Executive Power.” That’s quite the contrast. In a 2008 paper, “What’s a President to Do? Interpreting the Constitution in the Wake of the Bush Administration’s Abuses,” (PDF) she writes that the Bush administration’s disregard for the law should be the exception, not the rule, going forward:

If you delve further into Johnsen’s work, the contrast with Yoo gets even sharper; she directly criticizes his legal theories. In the 2007 paper (PDF), she wrote:

Yoo remains almost alone in continuing to assert that the Torture
Opinion was “entirely accurate” and not outcome driven.

One way to test Yoo’s claim is to consider whether OLC would have written the opinion in the same manner if the President had preferred to receive an OLC opinion that concluded the federal anti-torture statute actually did tie his hands. What if the question had come, for example, from an administration that was truly committed to treating all detainees lawfully and humanely but was under pressure from members of Congress who believed the President was not tough enough—who insisted that having the legal authority to cross the line into torture when questioning suspected al Qaeda leaders was in the United States’ national security interests? It is inconceivable that, in those counterfactual circumstances, OLC would have written the opinion as it did, interpreting the meaning of “torture” so narrowly or crafting the implausible defenses of necessity and self-defense. Even if written by the same lawyers—lawyers committed to an aggressively expansive theory of presidential authority—and even if it had reached the same ultimate conclusion, the reasoning and the issues addressed undoubtedly would have differed substantially.

Johnsen was essentially calling Yoo out and politely accusing him of not telling the truth. Later in her analysis of Yoo’s torture opinion, Johnsen writes that it “only makes sense as an advocacy piece, tailored to an administration that, as Yoo described it, ‘wanted the maximum flexibility for the president to win the war,’ including the flexibility to act counter to statutory constraints.” That’s a nice way of saying that Yoo tailored his legal opinion to allow the president to break the law.

But it’s not just Yoo whom Johnsen disagrees with. There’s also some evidence that she may not see eye to eye with her future boss on one policy matter. In “What’s a President to Do?,” she slams the Bush administration for the “extreme and implausible Commander-in-Chief theory” it used to justify its “highly controversial counterterrorism practice” of electronically surveilling Americans without complying with the Foreign Intelligence Surveillance Act (FISA). FISA required law enforcement officials to obtain warrants from a secret court that granted such requests over 99 percent of the time. The Bush administration thought that was too restrictive, and ignored the law. But in July, Barack Obama joined many congressional Democrats in voting for a revision of FISA that gave the telecom companies that helped Bush violate the law retroactive immunity for doing so and basically retroactively legalized the Bush administration’s violations of the previous FISA law. Johnsen probably wasn’t happy about that. She wrote in Slate in March that she feared “[W]e are growing immune to just how outrageous and destructive it is, in a democracy, for the President to violate federal statutes in secret.”

Johnsen concludes “Faithfully Executing the Laws” by emphasizing how important the president’s own attitude is to ensuring that OLC can support the rule of law:

Public cynicism notwithstanding, it is both possible and necessary for executive branch lawyers to constrain unlawful executive branch action. Ultimately, though, the President’s own attitude toward the rule of law will go a long way toward setting the tone for the administration. If the President desires only a rubberstamp, OLC will have to struggle mightily to provide an effective check on unlawful action.

By appointing Johnsen to the OLC, Obama is demonstrating that he doesn’t just want a rubberstamp for his actions. And if she stands by her own words, she won’t give him one.