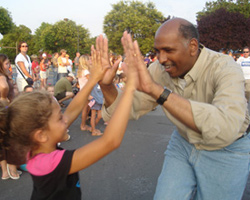 It turns out that Michael Steele — elected the first African-American chair of the Republican National Committee earlier this afternoon — has a situational opinion of Barack Obama and what his accomplishments mean for race in America. How else to explain the fact that when Steele talks about Obama, his thoughts change depending on his audience?

Here’s Steele fielding a question about Obama from Tavis Smiley at the Black State of the Union conference, held in New Orleans in February 2008. Steele is speaking to a predominantly black audience. Video to your right.

I’m very proud to see Barack Obama do what Barack Obama has done and is doing. I am philosophically polar opposites with the man. But it doesn’t change the fact that we are from the same community. And it doesn’t diminish nor weaken my pride in what he’s done. I would hope that all of us would be just as proud of an African-American Republican achieving such success.

Now here is Steele discussing Obama with NewsBusters.org, a conservative online news outlet, at the Republican National Convention. Video to your right, again.

Q: I wanted to get your take on the media coverage of Obama…

Q: What do you think is causing it? What’s the real culprit for the disparity [between Obama’s coverage and McCain’s]?

MS: I think some of it has to do with a level of white liberal guilt.

Q: So you think this is a race issue?

MS: For some folks it is, yeah… Politically, I think some people [in the media] are so anti-Republican—I just look at how they chewed up Hillary to get to Barack. What they were trying to figure out, who’s the best player to go up against the Republican establishment and who could trump certain things we’d be able to talk about that maybe Hillary couldn’t, and certainly, the race issue would be one of those landmines the [Republican] Party would have to deal with…. If the shoe were on the other foot, they would be scrutinizing the heck out of a black Republican or a Hispanic Republican…. If he wins, he’s a media creation, he’s a brand. America doesn’t need a president who’s a brand. America needs a president who can lead.

Dismissing Obama as a “media creation” is a rather dramatic swing from “I’m very proud to see Barack Obama do what Barack Obama has done.” The Republican Party and its leaders certainly need to learn how to talk about the progress of minorities in America better than they currently do. One might have thought that the GOP’s new leader would be able to teach them. But it looks like he has problems of his own.