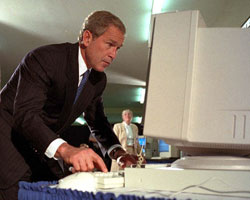 “You rolled the dice that you’d win, and you lost.” That’s what Magistrate Judge John M. Facciola told lawyers for the Bush administration at a hearing on Wednesday afternoon in the ongoing case over millions of missing White House emails. By this he meant that if the White House had followed the recommendations [PDF] that the judge had laid out last April—suggesting that the administration search workstations and portable media devices for the missing messages—it might not be in its current predicament. Instead, Bush officials apparently gambled that they would be able to get the case thrown out, an effort that was rebuffed in November. That bet came back to haunt the administration on Wednesday morning when, with days left before Bush officials vacate the White House, it was hit with a last-minute order (issued by Judge Henry Kennedy, who’s also presiding over aspects of the case) to search workstations and collect portable memory devices containing saved emails from departing staffers.

During the status hearing before Judge Facciola, government lawyers shed some light on the scope of the missing email problem. In the past, the White House has issued contradictory statements on the subject, once even denying that any emails were missing. “We have absolutely no reason to believe that any emails are missing; there’s no evidence of that,” White House spokesman Tony Fratto told reporters last January.

But on Wednesday Justice Department lawyer Helen Hong told Facciola that, to date, the administration has recovered 14 million missing emails, at a cost of $10 million. The number of recovered messages is far higher than the original estimate (over 5 million) reported by Citizens for Responsibility and Ethics in Washington (CREW), which, along with the National Security Archive, is suing the administration over the missing emails. It remains unclear how many messages are stll unaccounted for.

Hong told the court the Bush administration’s email recovery efforts would allow it to meet its statutory obligation to transfer its email records, along with a host of other presidential documents, to the National Archives. But lawyers for CREW and the National Security Archive are skeptical. “For the past year and a half, they said, ‘Don’t worry, don’t worry, leave us alone,'” says the National Security Archive’s general counsel, Meredith Fuchs. “Now they say, at the last minute, they have solved it. I want to see the evidence.”

It appears Judge Facciola would like to see the evidence, too. He issued an order [PDF] Thursday morning that, among other things, directs the White House to create an “inventory of all backup tapes and additional media they have collected or will collect” and provide copies to the National Archives and the court. In an accompanying memorandum opinion [PDF], Facciola remarks on the true urgency of the situation: “The issues that have now arisen are now confronted in true emergency conditions. As this is being written, there are two business days before the new President takes office and this case deals with the records created by the administration that is leaving office.” He notes that there is a “profound societal interest” in preserving the Bush administration’s email records. “They are, after all, the most fundamental and useful contemporary records of the recent history of the President’s office,” he writes. “If Napoleon was right when he said that he did not care who wrote France’s laws if he could write its history, then the importance of preserving the e-mails cannot be exaggerated.”

Photo courtesy of the White House.