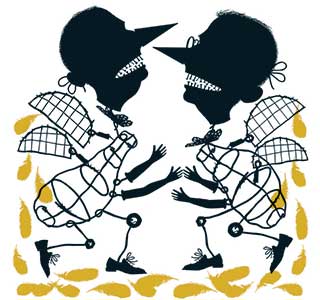 
As darkness fell over the nation’s capital one evening last fall, a diminutive, gray-bobbed academic lectured a rapt audience at the headquarters of the American Enterprise Institute. Dressed in a modest navy-blue skirt suit and black pumps, 86-year-old neoconservative matriarch Gertrude Himmelfarb seemed fragile behind the polished wood podium. A respected scholar of Victorian-era political philosophy, she is also the wife of neoconservative godfather Irving Kristol and mother of Bill Kristol, who was once Dan Quayle’s chief of staff and is now a New York Times columnist and editor of the Weekly Standard, whose offices can be found just a few floors below.

In a Q&A following Himmelfarb’s talk on British philosopher Edmund Burke, former Rumsfeld deputy and Iraq War booster Paul Wolfowitz, now an aei visiting scholar, was among those with a hand aloft, asking what Burke might have thought about the use of terror in the French Revolution. The entire proceedings had an elegiac, amberlike quality: The sun was setting fast on the recent era of neoconservative dominance, for which this very conference room—named after Albert Wohlstetter, the late nuclear strategist who inspired Stanley Kubrick’s Dr. Strangelove—often served as ground zero.

It was here that journalists and diplomats gathered dozens of times over the past seven years to see the likes of Pentagon adviser Richard Perle and Iraqi exile Ahmad Chalabi argue for regime change at aei‘s “black coffee briefings.” They came to listen as Iran-Contra alum Michael Ledeen made the case for overthrowing the mullahs, and as John Bolton, then Bush’s nonproliferation czar, argued for a confrontational approach to North Korea, Iran, Libya, and Cuba. If there was a factory for the Bush administration’s first-term foreign policy misadventures, this was it.

Now these hawks are anticipating a long, cold winter, courtesy of an Obama administration whose internationalist view of national security—from an avowed willingness to talk with hostile regimes to an Iraq drawdown—is often anathema to neocon doctrine. What will this estrangement from power bring? “We’ll do what we did in the 1990s, with things like the Project for the New American Century,” says Thomas Donnelly, an aei military expert and former senior fellow with pnac, a Bill Kristol-led advocacy group that spent the Clinton years pushing for the US to take out Saddam Hussein. “We have a core set of beliefs that is pretty much intact: that American power is a good thing and should be exercised.”

On behalf of those beliefs, they’ll be watching Obama like, well, hawks for any sign of weakness. “The easiest way to get traction is if the other side does something which lacks broad public support,” notes Patrick Clawson, deputy director for research at the Washington Institute for Near East Policy, a pro-Israel think tank, citing President Bill Clinton’s early struggles with gays in the military as an example.

Maybe exile won’t be so bad. After all, the neoconservatives, so effective from the sidelines, fell from grace after their ideas were battle tested in the real world. The movement’s maximalist theories haven’t fared well amid the mine-laden politics of the Middle East and the messy bureaucratic realities of US policymaking. Asked whether the hawks fault themselves, in part, for the recent power shift, Donnelly instead blamed Washington’s entrenched bureaucracies and, ultimately, the president. “The deep irony of this is, you get a guy like Bush, who was not exactly Mr. Neocon, to begin pursuing the right policy. At the same time, he has done so in such an incompetent fashion so as to discredit not only his conduct of the war, but the principles under which it was fought,” he says. In a postelection email, Donnelly seemed energized: “The boil’s been lanced, and I’m ready to get back into action. The argument for the soul of the Republican Party…should be big fun. Much better than trying to poke the Bushies into doing the right thing and explaining to people like you that they’re not as bad as they seem.”

The hawks indeed lost a good deal of clout during Bush’s second term. And while aei took in hardline castoffs like Bolton and Wolfowitz, the think tank dialed back its own rhetoric, focusing on how to solidify gains in Iraq rather than hosting debates over which nation America should liberate next. Perle has assumed a mostly emeritus status, while Ledeen left after two decades to join a smaller conservative policy group, the Foundation for Defense of Democracies (fdd).

But whatever its future, the movement will need money; while being the opposition can be good for fundraising, the economic meltdown certainly isn’t. Former Republican National Committee spokesman Clifford May, who runs the fdd, is hoping a right-leaning version of George Soros will emerge to fund a grassroots network that can rally the base around conservative national security policies. (One promising candidate, billionaire casino mogul Sheldon Adelson, proved an erratic supporter of right-wing advocacy group Freedom’s Watch, and his portfolio has taken a big hit.) May predicts that the Democratic sweep will help focus conservatives’ minds and loosen their purse strings.

Yet even the hawks sense opportunity in Obama’s purported inclusiveness. Despite their worries about his administration’s foreign policies, Donnelly and May would be more than happy to give him advice. “[The fdd] has briefed both campaigns, and we’ve found the Obama campaign open to hearing our point of view,” May says. “Indeed, we’d hope the door would remain open to us.”