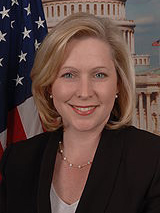 Now that Caroline Kennedy is no longer part of the deliberations, New York Gov. David Paterson seems ready to name one-term upstate congresswoman Kirsten Gillibrand to New York’s vacant senate seat. Born in 1966, Gillibrand becomes the youngest United States senator. Eve Fairbanks over at TNR runs down the merits of the pick. Here are the highlights.

[Gillibrand] was the only New York Democrat to support the May 2007 war-funding bill; the others voted against it because it did not contain a troop-withdrawal timetable. She also voted for H.R. 6304, the FISA Amendments Act, which extended immunity to telecoms that spied on U.S. citizens at the behest of the Bush administration.

During this year’s campaign, she described her voting record as “one of the most conservative in the state” of New York.

She’s one of a few representatives to disclose her daily schedule online, so reporters and constituents can see who’s got access to her. She also posts her earmark requests.

She has a child under one year old: a son, Henry, delivered this past May — just hours after Gillibrand sat through a marathon 13-hour Armed Services Committee hearing. Take that, Sarah Palin!

Gillibrand comes from a conservative district, which may explain her centrist voting record. Hopefully she’ll move left now that she represents the entire state. The most positive thing about the Gillibrand pick, though, is this: it resembles something like a meritocracy. She has a record as a hard-working public servant with committed stances on issues. She worked her way into a position of influence through determination and skill. (In 2008, she won 61% of the vote against a Republican who spent $5.5 million. From what I can tell reading online, she did it through pure smarts and hustle.)

Yes, there are other members of the New York delegation with more time on Capitol Hill. But the primary alternative was none of those people. It was someone with no record and no qualifications other than a family name. Gillibrand got this post because of work, not privilege, and that alone makes me happy.