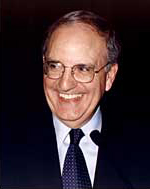 Former Senate Majority Leader George Mitchell, who successfully mediated peace in Northern Ireland in the late 1990s, is reportedly on the short list of candidates to become the Obama adminisitration’s special envoy to the Middle East. Recent reports have indicated that Richard A. Haas, a former State Department official and current president of the Council on Foreign Relations, is also under consideration, but the Council denies Haas is up for the job.

At first glance, Mitchell may not seem the most obvious choice for the Middle East envoy job. Others have far more experience in the region, and Mitchell’s success in Northern Ireland does not necessarily translate to the intractable conflict between the Israelis and Palestinians. But what you may not know is that Mitchell is himself of Lebanese ancestry; his father, John Kilroy, was an Irishman adopted by a Lebanese family, and his mother was a Lebanese Maronite Christian.

More than that, Mitchell had a brief, albeit unsuccessful, run as Middle East envoy during President Bill Clinton’s last-minute attempt to broker peace there before he left office. The so-called “Mitchell Commission” studied the conflict in detail for several months before releasing a report in April 2001 to the newly inaugurated Bush administration. (It’s recommendations were largely ignored, as indeed was the entire Middle East peace process.)

As with his work in Northern Ireland, Mitchell suggested in the 2001 report (available here) that no peace could come to the Middle East until both sides stopped the violence and steeled themselves for difficult negotiations. Beyond that, though, he affected a more balanced approach to the peace process, calling not only for the Palestinians to renounce terrorism, but for the Israelis to cease using economic blockades against the Palestinians and to halt the construction of new settlements in the Gaza Strip and the West Bank.

Mitchell, 75, has been in the private sector for the bulk of the Bush years, serving as CEO of the Walt Disney Company and, more recently, as chairman of the international law firm DLA Piper. According to this morning’s New York Times, Mitchell’s installment as Middle East envoy could sideline incoming Secretary of State Hillary Clinton, who would have less influence over the negotiations with such an eminent, proven peacemaker facilitating the process. But, says the Times, Mitchell “would be seen by both sides as a tougher but more balanced negotiator than recent envoys.” The Israelis, therefore, are likely skeptical of his appointment, fearing that he may not be as sympathetic to their cause as his predecessors. As Aaron David Miller, an expert at the Woodrow Wilson Center, told the Times, Mitchell’s appointment could indicate “that Obama is going to free himself of the exclusive relationship that we’ve had with the Israelis… This is the clearest indication to me that they’re trying to inject more balance into the Israeli-US relationship.”