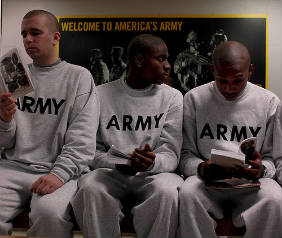 A few days ago, the New York Times reported that, thanks to the worsening economy, military recruiters are having better luck luring new recruits with promises of benefits, bonuses, and job training. According to the Times, the Army exceeded its recruitment goals in October, November, and December of last year.

But before we declare the Army’s recruiting crisis over, it’s worth taking a closer look at the numbers. A study released today by the National Priorities Project (NPP) finds that the Department of Defense is indeed meeting its recruitment requirements, but only by quietly lowering both its recruitment goals and the requirements for joining the military.

The Army, caught in two intractable wars, has had difficulty filling its ranks in recent years, placing added stress on those already in uniform. The Pentagon plans to expand the Army by 65,000 over the next several years to alleviate the strain. In doing so, however, it’s been forced to compromise on standards, which according to the NPP, will have adverse affects down the road as the overall quality of the US military declines.

The Pentagon judges a “high quality” recruit based on a combination of educational achievement and score on the military’s mandatory Armed Forces Qualification Exam (AFQT). Both have been manipulated, claims the NPP, to show improvement where little or none has been made. Take education levels. Before the war in Iraq, new recruits typically had at least a high school diploma. This is no longer the case, and the percentage of those with high school educations has fallen four years in a row. The Pentagon claimed far more high school-educated recruits last October than it actually had, thanks to a gentle twisting of definition; the Army’s numbers included all new recruiting “contracts.” But as NPP points out, contracts often fall through, and a far better measure is the number of “accessions,” or those who actually enlist.

As for the Armed Forces Qualification Test, the Pentagon’s goal until 2006 was to have a minimum of 67 percent of all new recruits scoring in at least the 50th percentile. When this was no longer possible, however, the military simply downgraded its goal to 60 percent, which it “met” it in 2007 and 2008, when 60.8 percent and 62.1 percent, respectively, scored in the 50th percentile.

Fudging numbers like these are bound to catch up with the military. By the Pentagon’s own admission, lower quality recruits do not perform as well and typically do not choose to commit to military careers. According to NNP, up to half of recruits with a GED or some other kind of equivalency degree drop out after their first term of enlistment is up. As the study concludes, “All this, when combined with the Army’s goal of increasing recruits by 65,000, indicates that it is well past time to look at the realities of an ever-expanding military.”