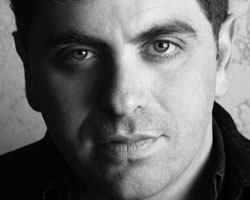 His first book, The American Way of War: Guided Missiles, Misguided Men, and a Republic in Peril, isn’t much cheerier, but it does offer activists a blueprint for civic engagement in 2009. He spoke about America’s political system recently with Mother Jones.

Mother Jones: You suggest that the American political system makes it difficult for one politician to change our political climate, especially overnight. Could you comment on this in terms of Barack Obama, since so many have high hopes for the president-elect?

Eugene Jarecki: America tends to fall victim to an overzealous belief in the cult of personality. For Americans, history seems to begin way back with Jesus, Mohammad, and Genghis Khan, and then sometime later there is Hitler and Martin Luther King, until we reach George W. Bush, Dick Cheney, and now Barack Obama. That is a wrong-headed view of history. Surely the big individuals in our collective history matter, but they are always a reflection of mass movements underneath them.

I think a lot of people see in Barack Obama a chance to feel young again, and that’s great, but it’s not great if you have an overzealous view of what he alone can do. But I don’t want to discourage anyone in any way about Barack Obama. My book is more a blueprint for civic action.

MJ: You have put forth that today’s economic crisis, where the government is bailing out several industries, is a direct result of the military industrial complex. Can you explain that in more detail?

EJ: This all goes back to Dwight Eisenhower. He gave us the term “military industrial complex” out of his shared concern about military expansionism and economic profligacy.

Eisenhower believed that no nation could ever achieve perfect security, any more than we [as individuals] can. We all know that we could walk out of the house tomorrow morning and get hit by a car; that’s just part of being alive. Yet nations, particularly the United States, tell their people that it’s possible to destroy evil in the world. Eisenhower viewed this as illusory and dangerous. A nation trying to achieve perfect security will never get there, but along the way it can bankrupt itself on several levels: militarily, economically, politically, and of course spiritually.

The picture I have in my mind is of a house: That’s America. As America got richer and more powerful, it had all sorts of riches in the house that it increasingly worried about the world envying. As we become more and more of an empire, of course, the barbarians are always at the gate. We become that much more paranoid, like a paranoid tycoon who thinks everyone wants a piece of him. So the richer the house got, the more fearful we got of it being under threat, as ironic as that might seem. So what do you do? You get a gun.

Increasingly, you start pawning the articles in the house to get a bigger and bigger gun. After a while, if you take that to its logical extreme, you will pawn the entire house to get the biggest gun, and you forsake all of the things that made the house valuable. At the end of the day, you’re standing in front of an empty house with a great big gun.

MJ: It’s fascinating that Eisenhower was a critic of the military system. He’s seen as such a Republican “man’s man,” for lack of a better phrase.

EJ: It’s no wonder members of the Eisenhower family, namely John Eisenhower, his son, and Susan Eisenhower, his granddaughter, have felt compelled to leave the Republican Party in recent years. That’s not so much a statement on the GOP as it is on the American political system per se. Eisenhower would be significantly to the left of today’s Democrats.

MJ: In reading your book it appears as if Congress hasn’t done that much better than the executive branch in trying to control the military industrial complex.

EJ: Congress’ effect on the soundness of the American system has plummeted as the corporate system has risen.

For example, imagine you are a congressperson in a district that makes the F-22. The F-22 fighter is a plane that we have spent 70 billion dollars on. It is an air-to-air combat aircraft, but we don’t have an enemy with an air force. It would stand to reason that that plane might come under review, particularly in a time of economic difficulty. If you are the maker of the F-22 you are not stupid: You have already succeeded in making sure the plane is not made in just one congressional district or another, but rather in many districts and, as it turns out for the F-22, in 45 US states.

That’s a process called political engineering. It is the first step by which you make the members of congress your functionaries in the process of securing your own private interests.

Members of congress will fall in line when the time comes to vote on weapons systems because they are relying on the jobs they provide and the friendship with the company that brings them campaign money.

MJ: While we’re on the subject of members of Congress, what’s your reaction to President-elect Obama appointing Rahm Emanuel, a pro-Iraq War Democrat, as his chief of staff?

EJ: Party doesn’t matter at all; the history of the military industrial complex and the history of how corporate power has come to take over Washington has no party stripe. Republicans and Democrats share equally in that history. Anyone who thinks that Republicans own the copyright on war or on corporate cronyism in America hasn’t read a history book.

Who Obama chooses to put in his Cabinet is less interesting to me than whether the public weighs in on it. What is happening right now is that the public voted for change, so it has a great deal of idealism invested. It is imperative that the public look at these appointments and ask itself, “So far, does this look like what I was expecting?” Instead, what is happening is that the public has gone lame duck. We cannot afford that. Left to its own devices, Washington will absolutely devour Barack Obama.

MJ: You talk a lot about the role of the public in government, and I think the readers of Mother Jones would agree with you that it is vital. What should the average citizen do during the Obama administration?

EJ: Well, first of all, I am the public. It just happens that I have the convenience factor of what I do for a living, which is implicitly political.

When I talk to fellow citizens, I am very aware that for other people it is harder to conceive what they can do to change the system. We are all overworked; we operate in a totally dysfunctional economy in which long hours and multiple jobs do not pay for the costs to live. We find ourselves in a kind of a dysfunctional game where it doesn’t add up. It is incredibly taxing.

For someone like me who does political work for a living, to stand on a soapbox and say “You need to be doing more” is offensive. To say to the public, “You have to be a Jefferson! You have to be a Madison! This country is a work in progress, you are a vital part of it, and it will go to hell in a handbasket without your vigilance,” is hard…And yet it’s true.