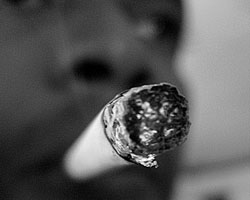 In the Supreme Court on Wednesday, Philip Morris, America’s largest cigarette company, compared itself to the NAACP. And to a South Carolina death row inmate illegally denied due process. And to indigent criminal defendants not afforded adequate legal representation. And it did so to win a case against an elderly African American woman named Mayola Williams whose husband died from lung cancer in 1997, after smoking three packs of Marlboros a day for more than 40 years.

The tobacco company has declared itself a civil rights victim, says Ray Thomas, one of Williams’ lawyers. “That they have the gall to do that shows how brazen they are,” he says.

Philip Morris’ victimhood dates back to 1999, when an Oregon jury hit the company with a $79 million punitive damages award in a lawsuit Williams filed after her husband Jesse died. She had argued that Philip Morris had deceived Jesse with its long-running misinformation campaign to convince the public that smoking was harmless, and that the company was thus liable for his death. (It’s easy to forget that it wasn’t until 1999—after the Williams verdict—that the tobacco company finally publicly admitted that smoking causes cancer.) The verdict was a rare smoker’s victory. For nearly 50 years, Philip Morris had defeated an endless string of personal injury lawsuits by waging a war of attrition on the plaintiffs, a strategy perfected by the tobacco industry. As RJ Reynolds’ general counsel explained in a 1988 memo, “To paraphrase General Patton, the way we won these cases was not by spending all of Reynolds’ money but by making that other son of a bitch spend all his.”

The first major verdict in a smoker’s lawsuit in 1988 was for only $400,000. The lawyers who brought the case spent $2.5 million to win it; the tobacco company spent $50 million. After the Supreme Court sent that case back for a new trial, the lawyers gave up, virtually bankrupt. That’s why, until 2001, when a smoker finally prevailed, no tobacco company had ever paid out a dime in damages. (The lawyers who eventually did get rich from tobacco litigation were not representing smokers but the states attempting to recoup Medicaidcosts related to smoking, a different issue.)

So naturally, after its big loss in Oregon, Philip Morris appealed, asking the Oregon appellate courts to overturn the verdict. The trial court judge had already trimmed the verdict to $32 million, saying that the original award was excessive. But the Oregon courts have not been a friendly playing field for the company. After hearing its appeal, the Oregon Court of Appeals responded by restoring the $79 million punitive damages award, a move the state Supreme Court approved unanimously, saying that Philip Morris’ egregious conduct merited the stiff punishment.

Since then, the cigarette manufacturer has succeeded in appealing the case to the US Supreme Court no fewer than three times, including this latest trip. And despite two separate orders from the Supreme Court to revisit the size of the punitive damage award, the Oregon Supreme Court has continued to find reasons to uphold its original decision—unanimously. In the last round, the Oregon court found a problem with one of Philip Morris’ proposed jury instructions, a state law issue, as grounds to avoid dealing with the question the Supreme Court had raised over the size of the award. An outraged Philip Morris calls this a “pretext” for refusing to overturn the award, and it has worked hard to frame its loss as the product of a rogue state court.

To do so, it has drawn on a case brought by the NAACP in 1958 after the state of Alabama tried to force the group to turn over its membership records. The case went to the Supreme Court four times because the Alabama courts, invoking state civil procedure rules, refused to comply with orders from above that it respect the civil rights group’s constitutional due process rights. In court Wednesday, Philip Morris’ lawyer Stephen Shapiro in effect compared the Oregon Supreme Court to racist Alabama judges, saying that the case was “very similar” to what happened in the NAACP case.

The rest of Philip Morris’ argument relies on the sort of cases that the modern Supreme Court has been somewhat hostile toward: habeas corpus cases. Those are the appeals from criminal defendants, for instance, whose lawyers slept through their trials but whose convictions were upheld anyway. In the rare instances where defendants in those cases prevail, it’s usually because the courts recognize that they had a poorly paid, incompetent lawyer who screwed up the procedural rule at issue. The courts find that the constitutional issues trump the state procedure. But those criminal defendants don’t bear much resemblance to Philip Morris, which not only has enormous financial resources but was also represented at trial in this case by a lawyer who literally wrote the book on Oregon civil procedure rules.

Nonetheless, Shapiro repeatedly likened the company’s plight to that of the defendant in a 2002 habeas case, Lee v. Kemna. In Kemna, a jury convicted the defendant of murder after his alibi witnesses disappeared from the courtroom and the judge refused to grant a recess in the trial so the witnesses could be located. The Supreme Court granted the defendant a new trial because it found that the state court procedural rule wasn’t sufficient grounds to deny him a critical constitutional right. Philip Morris thinks it’s in the same boat in the Williams case.

Yet the justices didn’t seem to be buying that argument, perhaps for good reason. Kemna was an all-too-rare victory for a criminal defendant, says David Vladeck, a Georgetown law professor who worked on the case, noting that most criminal defendants in similar straits usually lose because the Supreme Court defers to the states to run their courts. “The Supreme Court’s answer to those people is ‘tough nuggies,'” he says. To give Philip Morris a victory, the high court would have to find some way to square such a decision with its general approach to criminal cases—which is not an easy act of jurisprudence. Indeed, Justice Anthony Kennedy, the court’s new swing voter, wrote a dissent in Kemna, joined by Justices Antonin Scalia and Clarence Thomas, in which he bashed the majority for disrespecting state courts and for not allowing the Missouri Court of Appeals to enforce its own rules.

Unfortunately, perhaps, for Williams, Kennedy seemed to have forgotten that case on Wednesday. His comments during oral arguments suggest that he was mighty upset that the Oregon Supreme Court had defied a direct order from the high court, however cleverly it might have done it. But Williams might not need Kennedy. During oral arguments, Justice Stephen Breyer, who had voted against Williams during her case’s last visit to the court, noted that when he had first read Philip Morris’ petition for certiorari, he thought that the Oregon court was indeed trying to do an end run around the Supreme Court. “I’m not sure that I think that now,” he admitted.

After showing a surprising familiarity with the factual record, Breyer expressed skepticism that the Oregon Supreme Court had “ambushed” the tobacco company with an obscure, rarely used procedural rule, as Philip Morris had argued in its briefs. Instead, Breyer said he had to put himself in the shoes of the Oregon Supreme Court, and after doing so, he suggested that those Northwest justices actually did a pretty thorough job of handling the case and applied its rules the same way it had been done for 100 years.

Breyer’s conversion had Robert Peck, the lawyer who argued the case for Williams, beaming after the arguments. Peck had gone into court as the underdog. The day before the arguments, Thomas, his cocounsel, had despaired that the court had not taken up the case “to do any good for Mayola Williams,” who is now in her late ’70s and who will be lucky to live long enough to see the decade-long litigation resolved in her favor. Yet after hearing Breyer’s questions, Peck remarked after the hearing, “This is not necessarily the case [the justices] thought it was.” Indeed, it’s not such a stretch to believe that the court just might find that Oregon is not Alabama, and Philip Morris is not the NAACP.