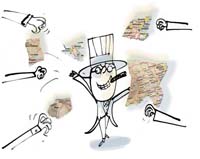 Here’s a last minute reprieve sure to make oil and gas companies scream: the Bush administration’s controversial auction of Utah’s public lands is going forward as scheduled on Friday, but with a major hitch. Environmentalists mounted a last ditch legal and PR campaign to stop the administration from leasing more than 100,000 acres of land near Arches and Canyonlands National Parks, Dinosaur National Monument, and Nine Mile Canyon—and on Thursday night they bought themselves a bit more time.

After putting out calls and emails to several sources, asking for comment on Friday’s lease sale, I heard back from one irate BLM veteran who said in no uncertain terms that the Interior Department has placed the interests of industry firmly above those of the public. Dennis Willis, a BLM manager in Utah who has worked for the agency for 30 years, told me he plans to retire effective January 2. For this reason, he was especially forthcoming in an email, which is worth excerpting at length:

What can I say that has not already been said? Just more of the same from a Department of the Interior that has no sense of ethics and no moral compass. It is like we are playing in some reality game show where deceit is just part of the game. Not good behavior for an organization that is managing the national heritage in trust for the public… Right now, BLM would make an omelette with California condor eggs if the oil and gas industry asked for breakfast. Everything including people, places, flora, fauna, art and history are mere impediments to energy production and most importantly corporate profit.

As for the matter at hand – the Christmas Sale. The worst and most offending parcels have been deferred. They won’t be on the auction block this time. Absent some change to the recently approved RMPs, they will go up again – if not in the next 4 or 8 years, sometime. At least for this Christmas, most of the Nine Mile and Desolation Canyon parcels can remain part of our wild heritage. The sick, perverted bastards have no concept of heritage. The archaeology of Nine Mile Canyon? Who cares, it’s an impediment. We used to call abandoned, unreclaimed wells as “orphan wells.” In current BLM speak, they are “Legacy Wells.” We are leaving one hell of a legacy for future generations to deal with.

The industry is spinning the situation as usual. The auction, says one flack for the Independent Petroleum Association of Mountain States, “comes after the BLM spent seven long years updating the Resource Management Plans in an open and public process, in an open and public process in which all stakeholders…including environmental groups and the National Park Service, and others, had multiple opportunities to comment.”

But we’ll call that bluff: As I reported in September, those resource management plans, heavily slanted towards oil and gas interests, were rushed to the printers in the closing months of the Bush Administration.

Since then, the National Park Service complained loudly and publicly about not being consulted by BLM when the acreage near Canyonlands and Arches was put up for sale.

That triggered a storm of protest, prompting the BLM to scale back its original leasing plan from 360,000 acres of public land to 164,000 acres. “It’s a little like someone telling you they’re going to rob only part of your house,” US Rep. Brian Baird (D-Wash.) told the Associated Press Wednesday.