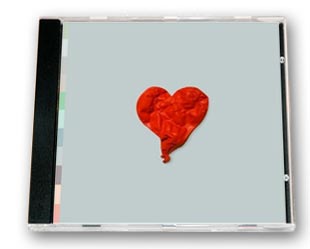 It’s been a big week for the horrifically-designed friend-accumulation and lo-fi mp3 streaming web site MySpace. They grabbed the new G N’ R just yesterday (the song “Chinese Democracy” is up to almost a million plays), and now they’ve got the new Kanye West album, 808s and Heartbreak, which isn’t out until Tuesday. Of course, they can’t help but screw things up, as Rolling Stone points out, their “fancy artwork” called the album “808s and Heartbreaks.” In fact, they’re kind of accurate: the album takes stock of all sorts of troubles in Kanye’s life, from the death of his mother to failed relationships, from materialistic tendencies to a sudden regret he never had children. One heartbreak flows into another on this strange, lonely album.

I complain a lot about the audio quality of MySpace’s streaming tracks—the service automatically downgrades any uploaded mp3s to 96kbps, low enough to be noticeably worse than a 99-cent 128kbps file on iTunes—but Kanye, as usual, has jumped out in front of this development, for better or for worse. Much of 808s and Heartbreak sounds like it was recorded underwater, on a throwaway (and, uh, waterproof) digital recorder, so the crappy MySpace streams sound just as good as the originals. Of course, much has also been made of the album’s use of Lil Wayne’s favorite toy, the Antares Auto-Tune pitch-correction software (you thought I was going to say “bong,” didn’t you), but the most noticeable thing to me about Kanye’s vocals is how muddy they are. Add the robotic Auto-Tune to the reduced fidelity, and you get the overwhelming impression of claustrophobia, like Kanye’s being squeezed (or squeezing himself) into a tiny box. It’s an oddly perfect metaphor for the gray, lifeless world view and self-denial of the heartbroken, but it does mean 808s and Heartbreak falls squarely into “concept album” territory, and that it might not be that enjoyable to actually listen to.

NY Mag‘s Vulture blog checked out the album when it first leaked a couple days ago, giving it faint praise: “we have to admit, it’s not (technically) the worst thing we’ve ever heard.” I wonder what was? The NME calls the album “bold” but acknowledges that not all the tracks work, saying “Say You Will” uses “flaky hooks and backpack-rap-style beats with Frenchie-coffee-table-lektro blips and Enya-brand flute toots.” Yeeps!

The Huffington Post jumps into the record-review fray with a piece on the album, making an interesting comparison between the new high-concept robo-Kanye and Garth Brooks’ “Chris Gaines” character, calling him the only other artist “at such a commercial peak to take such a drastic, ‘artistic’ risk.” They’re realistic about the music, though:

As for the songs themselves, putting aside tragic and Autotuned context, some work and some don’t. “Amazing” delicately plods along beautiful builds until the bottom drops out and Young Jeezy delivers the record’s one rap verse with monstrous (and yet understated) flair. “Streetlights” is a drum-heavy ballad that flirts with cheesiness, but in the end is saved by layers of vocals and a moving melody. And despite adding Lil Wayne’s supersized ego to “See You In My Nightmares” falls surprisingly flat and forgettable.

The LA Times is more generous, finding common musical ground between the minimalist, spacey beats on Heartbreak and current underground electronica like M83 or Junior Boys. Even more interestingly, they explore Kanye’s use of the Auto-Tune as the foregrounding of the “fake”:

Because they’re so obviously “fake,” the sounds that come from primitive drum machines and manipulative software forces the listener to question what she does consider real — regarding not only the sounds she hears, but also the emotions they invoke. Puppets have historically been associated with the same questions Auto-Tune raises now. They seem to be more human than human, and if manipulated well can cause that uncanny feeling of not knowing where an object stops and humanity starts.

“Grace appears most purely in that human form which either has no consciousness or an infinite consciousness. That is, in the puppet or in the god,” wrote the German poet and philosopher Heinrich von Kleist in 1810. Watching the dance of a beautiful marionette, which has no sense of self, we begin to ponder our own self-awareness — the very essence of humanity. West seeks a similar effect on “808s and Heartbreak,” a heavy trip indeed.

Ultimately, 808s and Heartbreak is such a left-field album, only time will tell if it stands out as a classic or sticks out like a sore thumb. But you have to give Kanye credit, and not just for trying something different: he took his misery and actually made something out of it, a supremely difficult task.

808s and Heartbreak is out Tuesday, November 24 on Island Def Jam. Listen to the whole thing here, but you have to click on “featured playlist” in their player deal and select “808s and Heartbreak.” It took me a minute to figure that out.