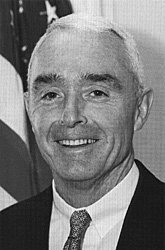 Barry McCaffrey, a retired Army general who now teaches international relations at West Point, has made frequent fact-finding trips to Iraq in the years since the 2003 invasion. A decorated Vietnam veteran, leader of an Army division during the Gulf War, and a former top general of the US Southern Command, McCaffrey’s experience has made him a respected voice in military circles, and a guy whose views on the Iraq War are not easily ignored.

Just back from his most recent trip to Iraq, McCaffrey—who in March 2007 characterized the US mission there as being in “strategic peril”—says in an “after action report” (.pdf) to his colleagues at West Point that the US military is “now clearly in the end game in Iraq to successfully achieve what should be our principle objectives.” Among these, he includes withdrawing US troops within 36 months and leaving behind an Iraq that has a functioning civil state and security force that is not engaged in war, either with itself or any of the country’s six neighboring states.

“The bottom line,” McCaffrey writes, “is a dramatic and growing momentum for economic and security stability which is unlikely to be reversible. I would not characterize the situation as fragile. It is just beyond the tipping point.” A sampling of recent successes, as McCaffrey describes them:

All that said, McCaffrey notes that the war is not won (however that may be defined) and risks remain that things could go south. For example, if a “Status of Forces” agreement is not reached before the current UN mandate for US troops in Iraq expires at the end of December, American units will have to return to their bases and begin withdrawal, threatening Iraq’s recent gains. Politicians in Baghdad have so far not agreed to US proposals, which McCaffrey says is like “holding a gun to their own head.” Beyond that, Iran’s covert operations in Iraq continue to be destabilizing, and if Tehran goes forward with nuclear weapons development, the inevitable US response could wreak havoc on the entire region, Iraq included. Then there’s the question of Kirkuk and control of nearby oil fields. A Kurdish-Arab war over this strategic prize could still be in the cards unless an oil-sharing agreement can be struck.

McCaffrey concludes that the incoming Obama administration “will have to think through their military options in the coming six months,” but that “the likely strategic outcome will be a more rapid forced drawdown than desirable in Iraq in order to enhance combat power in Afghanistan. It will be a tricky balance—but in my judgment we will pull this off successfully… As the Saudis note with great sadness—we entered Iraq uninvited… but we must not leave the same way. It is essential for both the US and Mid East security that we pull out of Iraq in a deliberate and responsible manner—and leave a stable and functioning state. This is clearly within our capabilities.”