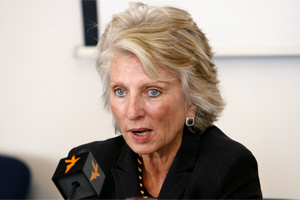 Petite, blond, elegant in a nubby suit, a vaguely patrician accent hinting at her Harvard Law School and Smith College education, Jane Harman has a polished, camera-ready exterior, but an inner core of grit, discipline, and unquenched ambition. An avid runner who completed the Marine Corps marathon last year, the high-powered seven-term California Democrat is a frequent fixture on the Sunday television-news talk shows, where she holds forth on intelligence and terrorism issues and jousts with Republican lawmakers. The television appearances are part of the congresswoman’s official duties (she chairs the House Homeland Security Subcommittee on Intelligence, Information Sharing and Terrorism Risk Assessment, and is the former ranking Democrat on the House intelligence committee), but they have also been part of Harman’s strategy of auditioning for a role as a security chief for the next president, be his name John McCain or Barack Obama.

At a forum on reforming the intelligence community held at the elite Council on Foreign Relations in June, Harman and Peter Hoekstra (R-Mich.), the ranking Republican on the House intelligence committee, sat in facing chairs on the dais, their banter as well practiced as that of a long-married couple. “[The next administration has to] repair the relationship with Congress,” Hoekstra told moderator Joseph J. Helman. “It is broken.” “I actually agree with every single thing Peter said,” Harman echoed, wryly leaving the Republican to do the Bush bashing. “I think the next administration needs to have a public dialogue…about a legal framework around all of our post-9/11 policies.”

Harman has done what few of her fellow Democratic lawmakers found possible or even desirable: She built strong, working friendships not just with Republicans across the aisle but with key officials in perhaps the most obstructionist Republican White House that Congress has ever encountered. “Her focus is always on national security first, and her partisan leanings always are much farther down the list,” says a congressional intelligence staffer. “She has criticized Democrats who she thinks are not putting national security issues first. But she has also preserved definite criticism on the Bush administration. She has taken on people when they have abused their power and violated the Constitution. She is not a shrinking violet.”

It’s that ideological flexibility that has made Harman both a successful negotiator and a longtime thorn in the side of some Democrats, including House Speaker Nancy Pelosi, with whom she has a long-standing personal rivalry. (After Democrats took the House in 2006, Pelosi denied Harman the intelligence committee chairmanship she had long sought.) But it also reflects the Los Angeles constituency Harman has represented. “At the time, it made strategic sense…She needed Republican votes to win in that district,” a former aide said.

Harman’s credentials coming into office were impeccable. A former Senate staffer and secretary to the cabinet in the Carter White House, Harman married another Carter administration official, wealthy industrialist Sidney Harman, and then moved back to her native L.A. in 1992 when the 36th District seat opened up. The South Bay district originally included both Democratic and Republican constituencies, and has much of the US aerospace industry. Later, redistricting made it a safe Democratic area, and in 2006, Harman faced and defeated a primary opponent challenging her from the left. In 1998, she ran unsuccessfully in the Democratic primary to become governor of California, then sat out one congressional term only to easily defeat the Republican who had replaced her. “Government is inherently political,” Harman told me. “In fact, I don’t think one can ever separate politics from policy. However, there are different ways to do it. The working model has to be that Congress is a partner.” Partnership was at work, she insists, in this summer’s passage of the controversial FISA law, which essentially legalized the NSA’s domestic surveillance program and granted retroactive immunity to the telecommunications companies that turned over customer data to the government.

Harman’s close relations with more moderate members of the Bush administration—she cites Secretary of State Condoleezza Rice, DHS secretary Chertoff, and Defense Secretary Robert Gates as among those with whom she enjoys particularly good relations—have paid off in access: Back in 2004, she was one of the handful of members of Congress the administration briefed on the NSA spying (and she was critical of the New York Times‘ decision to reveal the classified surveillance program in late 2005). Similarly, last summer, when the White House sent officials to brief the House intelligence committee on an updated executive order governing the intelligence community, Hoekstra, the ranking Republican, staged a GOP walkout to protest that the committee had not been consulted on the order. Meanwhile Harman—who is no longer even a member of the committee—had been briefed on the order the day before. “Harman was the first member of Congress briefed by the White House,” said one former Hill aide who asked to speak on background. “For whatever reason, the White House likes Harman…She loves it.”

Now Harman has set her sights on a higher goal: an appointment as director of national intelligence, overseeing the vast almost $50 billion, 16-agency US intelligence community—or, alternatively, Homeland Security secretary. “I would be very flattered” by an offer of a cabinet post, Harman told me in late August. A Clinton supporter during the primaries, Harman now backs Obama. But in our interview, she repeatedly referred to a “McBama” or “OCain” administration, seemingly positioning herself for a role in either a Democratic or Republican administration. “I don’t want to recommend what any president should do,” she said when asked if a president Obama might keep on someone like Defense Secretary Robert Gates. “But continuity has a role. Some of these people are extremely wise. If I were president, I would want to have a bipartisan administration.”

In the end, Harman’s ability to compromise could be the source of her success or failure. The deals under which members of Congress get “read into” secret intelligence programs can breed both insight and complicity, leaving legislators “captured” by the very community they are supposed to oversee. Did Harman’s willingness to play by the rules under which she was given access leave her compromised?

Harman insists it did not; that on the contrary, her experience has given her insight into how the administration’s secrecy masked flawed policies. “The sadness,” she says, “is we have a spent a lot of years with this executive branch cell that has come up with secret policies that once exposed to sunlight were revealed to be bad policies.” Whether the next president will be impressed by that argument remains to be seen.