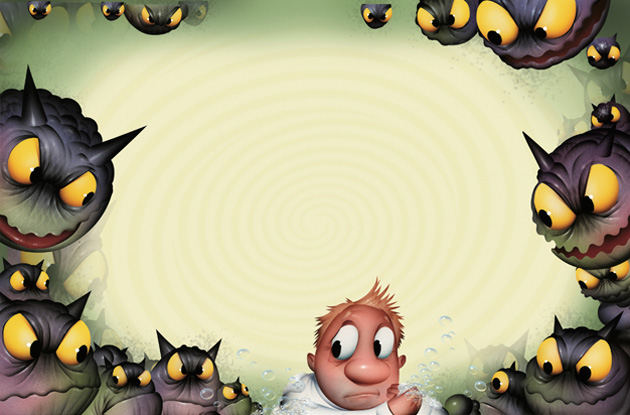 The US market for hand sanitizers has grown 200% since 2002. Purell controls more than half of the $164 million industry.

In 2005, an fda advisory panel concluded that antibacterial soap is no better than regular soap for preventing infection.

In the face of vigorous soap industry lobbying, the fda has yet to rule on whether these products contribute to antibacterial resistance.

Purell’s Force Sanitizer Military Bottle is sold to GIs as “a fistful of protection in the war on germs.”

Triclosan, the active ingredient in many antimicrobial soaps, has been detected in women’s breast milk and 58% of US waterways.

In 2006, a Maryland prisoner was hospitalized for becoming “loony,” “red-eyed,” and “combative” after swigging from a gallon of 120-proof Purell.

A 2007 study found that adults who regularly use household cleaning sprays are 30-50% more likely to develop asthma.

1/3 of Americans say they should wash their hands more often.

The nephew of hair care mogul Vidal Sassoon has invented a gadget that sprays a doorknob with disinfectant every 15 minutes.

8% of Americans flush public toilets with their feet. 14% avoid them altogether.

Nearly all Americans claim they wash their hands after using public restrooms, but researchers have observed that 12% of women and 34% of men do not.

An analysis by a Pakistani economist finds that it is “inefficient” for men to put down the toilet seat. Yet he also concludes that being yelled at for not doing so is worse.

In 2004, a Catholic diocese in New Jersey told churchgoers not to shake hands during flu season.

Double-dipping a chip transfers 10,000 bacteria to the dip.

Forget the “5-second rule”—food dropped on the floor can pick up salmonella bacteria in just a few seconds.

A dermatologist told the New York Times that dirty exercise mats may have caused an uptick in skin infections among women who do yoga and Pilates.

Pediatricians prescribe antibiotics to more than 50% of kids who complain of sore throats.

The Lancet reports that American doctors order antibiotics for 80% of patients with sinus infections—usually caused by the cold virus.

After the 2001 anthrax scare, 4% of Americans said they obtained prescription antibiotics.

Penicillin-resistant microbes first appeared in 1947, 4 years after the drug was released. The antibiotic was sold over the counter until the mid-1950s.

85% of mrsa infections are linked to health care facilities.

Fewer than 50% of health care workers regularly wash their hands while on the job.

A sampling of New York doctors’ ties found staph on 1/3 of them.

Infectious Awareables sells silk ties with a staph design in gray, taupe, or burgundy for $39.95.

The Soap and Detergent Association claims 44% of people wash their hands after handling money.

Donald Trump says he didn’t run for president in 2000 because “I had to shake too many hands.”