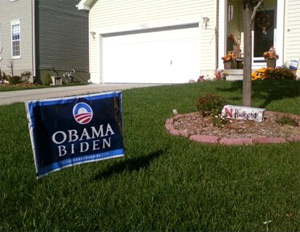 Lately, we’ve seen a lot of press about Obama making inroads in traditionally Republican areas, perhaps none more intriguingly than Nebraska’s second congressional district, comprised of Omaha and its suburbs. I grew up in outstate Nebraska (not far from where Children of the Corn was filmed, to give you an idea) and while I’m proud to say the state is no Kansas, with its anti-abortion billboards and evolution-denying school boards, it’s still incredibly hostile territory for national Democrats. However, I just got back from a quick trip to see family in Omaha, and without even trying, I ran across ample evidence that my home state may be ready for change, in Gotham bold.

Much of the theory about Obama’s potential in Omaha centers around the large African-American community in North Omaha, as well as the smattering of liberals in the center of the city; venture west of 72nd Street, and the Applebee’s-studded blocks are about as conservative as the rest of the state. But when I met up with my family at a Holiday Inn breakfast buffet right on 72nd St. Saturday morning, the first thing I saw was a guy with a mullet and baseball cap wearing some sort of “Metalworkers Union for Obama Biden” T-shirt. I made a dumbfounded face at my parents and pointed, as if at an exotic bird, but they just shrugged: It turned out they were used to it. 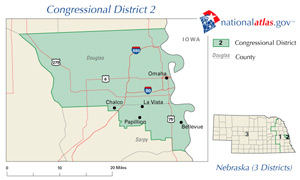 My sister and her husband live way out in the suburbs in a brand new development—so new, in fact, that the area was just annexed into the Omaha city limits within the last year. Granted, it’s an “entry-level” area, with small houses that appeal to young families, but I was still astonished to see four Obama yard signs on my sister’s little street (see one above), and nary a McCain/Palin placard in sight. Suddenly, the Obama campaign’s new West Omaha office made a lot more sense.

My mom went out to take my toddler nephew for a stroller ride around the neighborhood, and I tagged along. We aimed for the playground and plopped him into the baby swing. Nearby, a group of elementary school kids was busy burying one of their own in the sand, and as I eavesdropped, the topic of politics somehow came up. An older boy with an American flag T-shirt seemed to issue a challenge to the younger kids, asking, “Aren’t you for McCain?” A chorus of “no’s” rose up. “McCain, yuck,” one of them shouted, “Obama says he won’t raise taxes on anybody making more than 250 million dollars!” “250 thousand,” the older kid corrected. “Well, we don’t make that much anyway,” the younger one responded, “so it doesn’t matter.”

Later, we took our extended family’s various kids out to a Halloween-themed pumpkin patch near the small town of Bennington, the city to which my sister’s suburb had only recently belonged. Its tiny, original downtown is just a mile or two across the cornfields from the inexorably expanding Omaha outskirts, but feels a thousand miles away, with the Applebee’s replaced by farm implement stores. It was here I saw my first and only McCain/Palin sign, in a small, well-manicured lawn. But almost on cue, we turned the corner and there’s an Obama/Biden sign, positioned proudly next to a homemade “Go Lady Badgers” poster, which I hope referred to the local sports team.

As I drove to the airport this morning, a syndicated morning zoo show on the local classic-rock station was making fun of celebrities, offering up jokes about Jenna McCarthy’s “big cans.” Then the host read a news story about illegal immigrants returning to Mexico because of the economic situation here. The whole crew was apoplectic. “Was that the Bush administration’s immigration policy,” the host shouted, “to make our country suck so bad that everyone will want to leave?” On the other hand, I thought, Nebraska’s now become so liberal, I can almost imagine moving back.