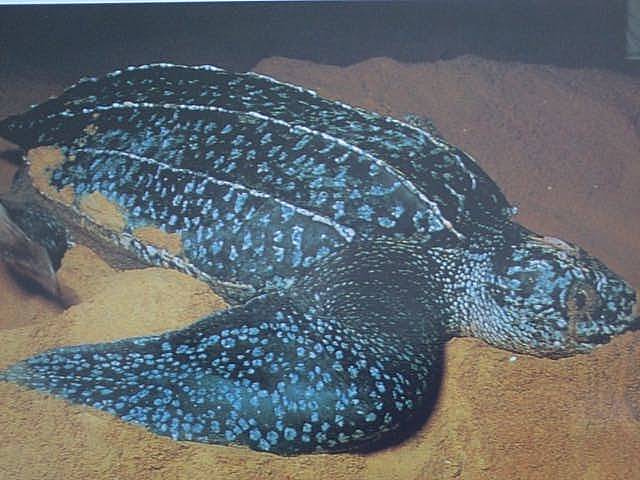 The IUCN meeting in Barcelona has adopted a resolution urging nations to create marine protected areas along the Pacific leatherback sea turtle’s migratory routes. The plan is designed to shield critically endangered leatherbacks from devastating longline and gillnet fisheries. Hopefully it will also save the hammerhead sharks ravaged in those fisheries too.

The resolution is sponsored by the a Costa Rican nonprofit PRETOMA and centers around a “Cocos Ridge Marine Wildlife Corridor.” Recent satellite tracking data has shown that Pacific leatherbacks swim from nesting beaches in Costa Rica to the Galápagos via the Cocos Islands. A protected corridor along this route during the migratory seasons could save many of the last leatherbacks.

For those unfamiliar with these ancient and wondrous giants, leatherbacks are the last members of a lineage that has outlived the dinosaurs. They grow to the size of small automobiles, dive more than half a mile deep, and migrate across the entire ocean basins to feed in the jellyfish-rich waters off the west coast of North and South America—covering more than 6,000 miles a year, one of the longest migrations on Earth. They also inhabit the largest geographic range of any reptile, from the tropics to near polar waters. (How do they do that, you ask? In most interesting ways.)

Their migratory route was deciphered by tracking with electronic tags—part of the TOPP program of the Census of Marine Life. Very cool science. But as George Shillinger of Stanford reminds us: “Now it’s time to turn the high-tech science into political will and conservation action for critically endangered leatherbacks.”

Leatherbacks in the Pacific have declined by more than 90 percent in the past three decades. They’ve been drowned in industrial longline and gillnet fisheries. Their nests have been raided for eggs. They’ve died entangled in marine plastic debris. They’ve died eating marine plastic debris that looks like jellyfish (e.g., your and my “disposable” shopping bags). Their nesting beaches are now threatened by global warming-induced sea level. Without immediate help, Pacific leatherbacks will be extinct soon.

So far, more than 8,000 scientists, government officials, and environmental organizations from over 250 nations have offered overwhelming support for the resolution to protect leatherback swimways.