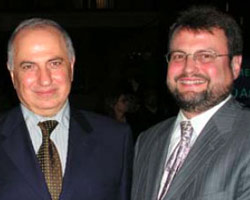 Back in the fall of 2002, long before president Bush had told the public of his plans, the man who would become the John McCain campaign’s top foreign policy advisor was tasked with a sensitive mission that had come from the White House: to set up a group to lobby for war with Iraq. The group that Randy Scheunemann subsequently set up and became president of, the Committee for the Liberation of Iraq, argued, as did Iraqi exile politician Ahmad Chalabi, that the problem with Saddam Hussein was not just his (alleged) weapons, but the nature of the regime: “We believe it is time to confront the clear and present danger posed by Saddam Hussein’s regime by liberating the Iraqi people,” Scheunemann said in a press release announcing the creation of the Committee on the Liberation of Iraq, which was celebrated by a party at Chalabi’s Georgetown home, according to Chalabi’s biographer Aram Roston.

So how close really were Scheunemann and Ahmad Chalabi? In this piece, I asked long-time Chalabi advisor Francis Brooke, among others:

Brooke says he met Scheunemann in 1996 when he and Chalabi were hitting Capitol Hill to try to drum up increased US government support for the Iraqi opposition. Brooke’s pitch then was that putting pressure on Saddam Hussein was not just the right policy; it was also a vehicle for attacking Bill Clinton, then running for reelection. “I thought it was a good time to educate the Republican Congress…and give them the ammunition they needed to beat the president up.” In Scheunemann and other hardliners on the Hill, Brooke says he found kindred spirits—a clique of Republicans deeply disillusioned with how George H.W. Bush had let both the Cold War and the first Iraq War end without meting out sufficient punishment to America’s adversaries. “These people had a great sense of psychic loss that we had not finished the first Iraq War in the most comprehensive way. They hated George Bush the first.”

Still, Scheunemann, who then worked for Senate Majority Leader Trent Lott, was initially skeptical. After he and Chalabi made their pitch, Brooke said, “Randy said, ‘This is all fine but on the other hand, the CIA and other parts of the US government tell me that the Iraqi opposition is a feckless bunch of people, that can’t do anything, have no support inside the country, and have probably been up to no good all over the place.'” Brooke says he encouraged Scheunemann to do his own research, and eventually convinced him.