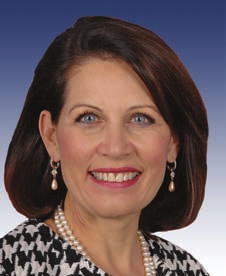 With her career in jeopardy because of her McCarthy-esque comments on Hardball, Rep. Michele Bachman (R-MN) is in full spin mode. She’s telling everyone who will listen, “Chris Matthews laid a trap, and I walked into it.” And she’s trying to raise money off of the episode. Here’s an email she sent to supporters:

I apologize for the rude language. But, these are just a few of the names that my staff and volunteers have been called over the past 24 hours simply because they work for me.

Ever since my appearance on MSNBC’s Hardball on Friday night, my office has received calls from all across the nation – California, Illinois, Georgia, Texas, Oregon, Vermont, and elsewhere. Some of the calls have been respectfully disagreeing with my statements on the show. Most, unfortunately, are full of hate and anger and language like that above – and worse.

And, they’re putting their money where their mouths are.

My opponent has told the media that the Far Left has donated more than half a million dollars in the 24 hours following the show.

Click here to let them know that we’re not going to stand for their lies.

…Chris Matthews did what Chris Matthews is paid big bucks to do: Twist my words and set them up for full-fledged distortion when his next guest came on. And, when the liberal blogs got hold of little clips of my appearance, the spin machine really kicked into overdrive.

…And, that is what is inspiring hard core leftists from all across the country to send more than half a million dollars to my opponent.

Here, again, is the quote that got Bachmann into the most trouble: “The news media should do a penetrating expose and take a look. I wish they would. I wish the American media would take a great look at the views of the people in Congress and find out, are they pro-America or anti-America? I think people would love to see an expose like that.” You know, I’m not sure that needs twisting from Chris Matthews or the liberal blogs (hi!) to make it inflammatory. It’s pretty damn inflammatory on it’s own.