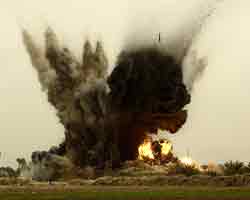 In recent months, as politicians, pundits, and military officials have debated the causes of the precipitous decline in violence in Iraq, some prominent terrorism experts (including Peter Bergen and Paul Cruickshank in the March/April 2007 issue of Mother Jones) have begun warning that the relative calm may be giving way to a new threat—a fresh generation of Al Qaeda, battle-hardened in Iraq and bent on exporting what they’ve learned to new fronts.

Such a diaspora has precedent. In the mid-1980s, thousands of jihadis from North Africa and the Middle East flooded into Afghanistan to fight the Soviets—Osama bin Laden and his original corps of lieutenants among them. These so-called “Afghan Arabs” made up a relatively small portion of the anti-Soviet mujahideen, but their influence would ultimately eclipse their number. Experts disagree over their impact on the outcome of the fighting (the conventional wisdom holds that it was marginal at best), but their very participation in the Afghan jihad, regardless of their effect on the battlefield, forged a mythology around which Al Qaeda would coalesce: not only had it defeated the Soviet Union, but it delivered the lethal blow that caused the Soviet bloc to collapse. Emboldened by their perceived success in Afghanistan, thousands of Afghan Arabs returned to their home countries after the Soviet withdrawal, intent on continuing the jihad.

In Iraq, foreign fighters are also few in number, accounting for just 10 percent of Al Qaeda in Iraq’s (AQI’s) personnel, according to Bruce Hoffman, a counterterrorism expert at Georgetown University. “We’re also talking about much smaller numbers than the Afghan Arabs,” he says. “Those were in the thousands or maybe in the tens of thousands. Here we’re talking about survivors, probably in the hundreds.” But this cadre of survivors, says Hoffman, could make their presence felt on distant battlefields, as did the Afghan Arabs before them in places like Bosnia and Algeria. “No matter how relatively small the number of foreign jihadis who may be fighting/have fought in Iraq,” he observes, “having been bloodied in battle there, they will possess the experience, cachet, and credibility useful for both jihadi recruitment and operational purposes elsewhere.”

This already seems to be the case in Afghanistan. According to the Washington Post, infiltration of foreign fighters into Iraq has declined from 110 per month in mid-2007 to as few as 20 per month in July 2008. Meanwhile, Islamic extremist websites have begun urging new recruits to head for Afghanistan rather than Iraq. In July, the Post reported that as many as 15 senior AQI leaders had transited through Iran on their way to Afghanistan. While it’s difficult to draw a direct connection, the corresponding increase in violence in Afghanistan over the same period seems to indicate that insurgents, recognizing defeat in Iraq, have shifted their focus. For the first time since March 2003, Afghanistan is claiming more lives: 121 coalition forces since July, versus 71 in Iraq during that same period.

Analysts are divided over what the increased violence in Afghanistan signifies. Regarding the transfer of AQI fighters from one theater of operations to another, Marc Sageman, terrorism scholar in residence at the New York City Police Department, is skeptical. “I don’t take it very seriously,” he says. “That’s not the nature of Al Qaeda. This is not an army with a general staff; it’s basically guys who go somewhere to fight. If they’re killed, they’re killed. If they escape, they escape. There’s really no real strategy.” He also notes that while the tactics used by AQI may be migrating to Afghanistan, there’s “not that much back and forth because these guys are vulnerable when they travel.” Brian Fishman, director of research at West Point’s Combating Terrorism Center, acknowledges that analysts “don’t have a really good sense of how big a problem this is.” Nevertheless, “everybody’s been worried about this from the beginning because of the legacy of the Afghan Arabs.” Foreign fighters who can no longer get into Iraq are “winding up in Lebanon,” says Fishman. “Some of them are probably hanging around in Syria, and others are getting redirected to other areas like Somalia and Afghanistan and Pakistan.” A July 2008 report released by the Combating Terrorism Center notes that suicide bombers trained in Iraq hit US targets in Jordan in 2005, while others have been apprehended while plotting attacks in Saudi Arabia and the United Kingdom.

Despite debate over the extent to which AQI fighters are dispersing to new battlefields, there’s little question that the organization’s methods are increasingly being employed outside of Iraq. The number of suicide attacks, for example, rare in Afghanistan and Pakistan before 9/11, has grown exponentially; according to Pakistan’s intelligence service, in the first eight months of this year, there were 28 suicide attacks in Pakistan and 36 in Afghanistan, together claiming over 900 lives. (During that same period, for the first time, suicide bombers killed more people in Pakistan than in Iraq: 471 versus 463.) “Whether or not the actual people migrate, the tactics and techniques are [migrating], and they’re going to change the nature of warfare,” says Hoffman. “The people coming from Iraq have expertise almost across the board in insurgency, from suicide tactics to force-on-force attacks to sophisticated standoff attacks with remote-controlled missiles or rockets to IED types of technologies. It just means that the learning curve for insurgents is now short, and they’re able to learn from previous experience and adapt almost immediately, almost in real time.”

Fishman agrees, adding that veteran AQI fighters are, as a rule, probably more skilled than their Afghan Arab predecessors. “If you’ve been fighting in Iraq, you probably had a much more intense experience,” he says, acquiring skills that are more easily transferable to urban environments than those learned by the Afghan Arabs fighting the Soviets in the mountains. “Being able to operate and run a covert network in an urban environment, understanding how to avoid intelligence detection…If you survived this long being in Iraq, you probably picked some of that up. And those are the kinds of intense skills that are not only useful in Afghanistan and Pakistan, but they’re useful if you want to operate in Amman or Cairo or Paris.”