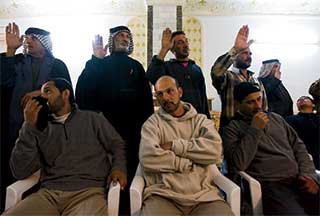 
One night in Baghdad, I accompanied Lieutenant Rob Johnston of the 2nd Squadron, 2nd Cavalry Regiment on a raid into the Abu Dshir neighborhood, searching for supporters of Moqtada al-Sadr and his Mahdi Army militia. The soldiers broke down the gate of a home and walked in. “We are not Mahdi Army,” an old man protested. It was a middle-class house with none of the political and religious symbols usually associated with Sadr supporters. Five women and a child were herded into the living room as three men were interrogated. “We hate the Mahdi Army,” said an old woman, “believe me.” The women were made to stand, empty their pockets, and pat themselves down.

One of the men was a laborer. Another worked in a pastry shop. Their brother served in the Iraqi army. The men were shown a photo lineup of Mahdi Army suspects, but they recognized none. “We are not terrorists,” the 70-year-old patriarch said. “We like the government.” Most of their protests went untranslated, but when the old man complained that his handcuffs were too tight, the 22-year-old Johnston put his finger between the cuffs and the man’s wrists. “If I can fit one finger, it’s okay,” he told the man, whose sons were taken away, as were their phones, computer, cash, personal papers, CDs, and other objects of interest. “They probably got some propaganda in there,” a sergeant explained as he carried off a hard drive. On the way back to base, the tired US soldiers bantered in their Stryker: “You know what I hate most about detainee duty?” said one. “Watching those motherfuckers shit.”

American troops currently hold more than 20,000 detainees in two main Iraq prisons, and unknown numbers in smaller holding facilities. Very few have ever been charged. In December, the 1-28 Infantry asked elders in Baghdad’s Jihad district to name neighborhood residents who should be released. A list of 700 men was submitted, most of them locked up for being “suspected of Shiite militant activity,” commanding officer Lt. Colonel Patrick Frank told me. Only 14 were approved that day for release. I went to see the ceremony the troops were holding for the occasion.

The Americans had built a “reconciliation hall” for the committee of men they had selected to guide the neighborhood. Frank had maps he showed local leaders, with red stars or green stars indicating whether violence had gone down in their area. He gave a metal emblem of the black lion that symbolized his unit to an American correspondent in case she ever had problems. “The Iraqis know us and love us,” he said. “Just show it to them and you’ll be fine.”

Outside the hall, an angry young woman waited with her two small children. Her husband had been arrested 15 months earlier while sleeping on his roof to avoid the summer heat. He’d been rounded up with all the other men of military age in the area after a neighbor was shot. Their son had been born while he was in prison. She did not want to talk reconciliation.

The 14 prisoners were brought in handcuffed. The few journalists present were ordered not to take pictures until the cuffs were removed. Behind each of the men sat a “guarantor” for a “bond” they would sign. “It’s not an oath on the Koran,” Frank explained. “It’s on their honor. A guarantor is a mentor, just like in the US when an individual runs into trouble with the law and somebody steps up to mentor them. The reconciliation committee wants to see these 14 men do well.” The Iraqis seemed slightly amused.

“We want to make this a special event,” Frank said, asking the restless men to quiet down. “Thank you for being patient, but this is for you.” Prisoners and guarantors got up pair by pair to sign each bond. An Iraqi lieutenant colonel played his part. “The government is in control now,” he scolded, “not like before. There is a state and there is law.” He urged them to join the army or the police. Frank was uncertain what to call the prisoners, since “detainees” was no longer accurate. “We will now ask each individual to stand,” he said. “Raise your right hand. Guarantors, put your left hand on the shoulder of the individual.”

The men began: “I acknowledge that recent signings of the Reconciliation Agreement have ushered in an era of peace and partnership between Shia, Sunni, Kurdish, Christian, the Jaysh al Mahdi, Iraqi Security Forces, and American Forces. Based on a review of my arrest record, Iraqi Government and Coalition Force leaders have agreed that my immediate release would be beneficial to the reconciliation process. I pledge to not commit any violations of the Reconciliation Agreement’s 12 points, violate Iraqi Law, or attack Coalition Forces.” The men were not told what the 12 points were. “As a proud Iraqi citizen living in Northwest Rashid”—a geographic designation that Iraqis do not use—”I will become a contributing member of the community in the historic effort to rebuild this proud nation.” The guarantors swore that they were “bound by honor” to notify American or Iraqi authorities if the “individual” violated the oath.

Then Frank spoke. “The coalition would like to welcome all the members of the free Jihad community,” he said. “The area of Jihad has been changed a lot. Violence has been reduced tremendously, and this reconciliation is proof.” He did not explain with whom the freed men were reconciling. “With your release from detention, we expect that you will become part of the reconciliation, and we look forward to working with you and the guarantor, the person behind you. All the citizens of Baghdad are watching Jihad now,” he added, even though the only Iraqi journalist present was a lone freelance cameraman.

I left for a meeting at the Ministry of Interior. On the way, my driver stopped to buy black market gas from a man sitting on the side of the road, near an Iraqi police truck. I handed over a $20 bill, which the man thought was fake. He took it to the police to see what they thought. Iraqis—except for Sunni radicals—fastidiously groom their beards, and I had been too busy to go to the barber. The police asked for my ID. Upon hearing my accent and seeing my US passport, they panicked. They couldn’t read English, and I did not look like an American. They ordered me out of the car but kept their distance, believing me to be a suicide bomber. Only one was brave enough to try to handcuff me, but after he cuffed one wrist I refused to give him the other one, thinking they might kidnap me. We struggled while another policeman poked his Kalashnikov into my rib cage.

I asked them to let me call my contact at the Ministry of Interior, but they feared the phone would detonate the suicide vest I might be wearing. My driver pleaded with them, claiming I was Iranian, but they insisted I come with them, swearing on all the Shiite imams that they would not harm me since we were all Shiites. We drove to their headquarters, where their commander stared at my IDs for several minutes as I listed all the officials I could think of. Eventually he sent me on my way. I ended up spending much of the day at a government safe house, where all the televisions were tuned to Shiite religious channels. They took me upstairs to their private barber to correct my Sunni-looking beard. I asked for a Mahdi Army shave, and he happily obliged.