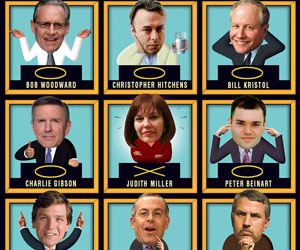 
it was late into the night of September 2, 2004. I was in the near-empty bar of the Essex House hotel in New York City. George W. Bush had just delivered his acceptance speech at the gop convention at Madison Square Garden. Before a pumped-up crowd, the president had declared that Iraq had been “a gathering threat” before he launched the invasion. He blurred the line between the terrorists responsible for 9/11 and the insurgents in Iraq. He described John Kerry’s vote against war funding as a vote to leave US soldiers unprotected. He claimed, “Our strategy is succeeding.” As I sat in the bar writing my piece, the tables next to me slowly filled with senior reporters and top editors from the Washington Post. Typing away, I could hear them deride Bush’s speech as a collection of misrepresentations. Their consensus was clear: Bush was trying to pull a fast one.

Yet the next morning, the paper’s front page flatly proclaimed, “Bush Promises ‘a Safer World’: Acceptance Speech Sets Lofty Goals.” The lead article was a straightforward account of the address, with not a hint at the well-founded skepticism of the paper’s own reporters and editors. A media outfit, abiding by the conventional rules of journalism (just the quotes, ma’am), had once again enabled a president who was not being honest. And I was reminded of a 1997 remark by Ben Bradlee, the former executive editor of the Post: “Even the very best newspapers have never learned how to handle public figures who lie with a straight face.”

In recent years, Bradlee’s axiom has been sorely tested. And while the question of just where Bush fits in the annals of presidential prevarication will soon belong to historians, a related matter is worthy of immediate contemplation: Will the Bush experience prompt the media to perform better next time the Bradlee test is relevant?

The debate over Bush’s relationship with the truth was well under way by the time the president took the stage at the Garden. By late summer 2003, a small flood of books had appeared questioning the veracity of the president and his political comrades, including my own The Lies of George W. Bush. Mainstream journalists and right-wing commentators quickly reached a consensus on why these books were being published—not because of any real problem, but because liberals had been driven to irrational hatred of the president. Writing in the New York Times, Matt Bai opined that “the new leftist screeds seem to solidify a rising political culture of incivility and overstatement.” Also in the Times, James Traub—while acknowledging that Bush had served up “quite a few actual fibs”—observed, “The sudden rash of jeremiads and their stunning popularity raises a question: Why are so many liberals, including sane and sober ones, granting themselves permission to hate the president?” In Time, James Poniewozik bemoaned “the rise of the anger industry.” Going further, columnist David Brooks warned that “The core threat to democracy is not in the White House, it’s the haters themselves.” On cnn, Tucker Carlson said the anti-Bush books were written to cater “to the paranoia and craziness of the far left” and were “selling because the Democratic Party has gone completely insane with Bush hatred.”

The ideologues of the right and the oh-so-calm pundits of the center were redefining the issue: Have the libs gone bonkers? They could not handle a serious discussion of Bush’s untruthfulness. As National Review editor Rich Lowry declared, “I don’t think the public is going to buy the idea that [Bush is] a liar.”

Well, the public did, no thanks to the commentariat. After September 11, as many as 77 percent of Americans described Bush as honest and trustworthy.

By early 2004 only a little more than half believed that; and earlier this year, 53 percent of the participants in a USA Today/Gallup Poll said that Bush “deliberately misled the American public” about wmd and Iraq.

It is a remarkable and defining fact of the Bush years that half the nation came to distrust him—right around the time he was reelected. Will we wise up sooner next time?

True, there are now more bloggers and websites that vet officials and journalists alike—from FactCheck.org (courtesy of the Annenberg Public Policy Center) to PolitiFact.com (established by the St. Petersburg Times and Congressional Quarterly). The Washington Post now rates fibbing pols on a 1-to-4-Pinocchios scale.

But there have been few repercussions for those complicit in the Bush administration’s truth mugging. Look at the op-ed page of the New York Times, and you will find David Brooks and Bill Kristol (who in a prewar debate with me on Fox News maintained with a straight face that Saddam was “past the finish line” on nuclear weapons) holding forth as if nothing has happened. Karl Rove pens a column for Newsweek. Reporters who functioned as a conveyor belt for false information skated as well, with the notable exception of the Times‘ Judith Miller.

A few media big shots did apologize for their prewar failure—sort of. The Times in 2004 published a tepid editor’s note conceding that its prewar coverage was “not as rigorous as it should have been.” The Post‘s Bob Woodward acknowledged that he and the Post should have been more aggressive. And some reporters who do fret about being hornswoggled again—say, on Iran—have vowed to be more skeptical.

But not everyone got the memo. That was evident this spring, when ex-White House Press Secretary Scott McClellan blasted his former boss for having relied on a “political propaganda campaign” to sell the Iraq War to the public. McClellan also slammed the national press corps for having been “too deferential to the White House” and having insufficiently challenged its rationales for war. It was rather like a serial killer complaining that the cops had been too incompetent to catch him. But McClellan had a point, and the response from prominent journalists suggested that some still haven’t taken the first step on the road to recovery: admitting the problem.

nbc News White House correspondent David Gregory passed the buck. “I think we challenged the president…If there wasn’t a debate in this country, then maybe the American people should think about why not. Where was Congress?” He added that McClellan “thinks…if we did not stand up and say, ‘This is bogus, and you’re a liar’… we didn’t do our job. And I respectfully disagree.” abc News anchor Charlie Gibson also let himself off the hook: “It was just a drumbeat of support from the administration. It is not our job to debate them.”

So could it happen again? “Definitely, it could,” says media critic Jay Rosen. “The press got played. There is no way to learn from that until you can say, ‘We got played.’ They aren’t there yet.” How the media come to terms with the W era, Rosen adds, is essential to their future. “There is some recognition that if journalists cannot say false statements are false, we aren’t going to be needing journalists for long.”

What should the media do differently? “My answer is to have a fetish about the truth and to consider the possibility the guys in power are lying on purpose,” Bradlee says. “It’s always a problem—I can’t remember a time when it wasn’t a problem.”