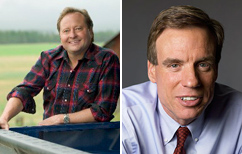 The relevance of the speeches that came before Hillary Clinton, who will surely get the lion’s share of the coverage tonight and tomorrow, is mainly felt among insiders. Democratic Party officials and politicians get a look at how their peers perform on a national stage; the political press gets to see who deserves buzz in conversations about future stars.

That said, there were some genuinely interesting people at the podium tonight. Ted Strickland, the governor of Ohio, and Brian Schweitzer, the governor of Montana, were two such people. Unfortunately, Mark Warner, the former governor of Virginia and a current Senate candidate in that state, was not. Warner painted himself as a bizarro Obama. Both Warner and Obama came from hard-luck circumstances, both made themselves into superstars by working hard and taking advantage of the opportunities for advancement that only America affords. But Warner’s meteoric rise was in business — he has made hundreds of millions through early investments in cell phones — while Obama’s was in politics. And the speech was heavy on “Yes, We Can” enthusiasm. Warner was a pragmatic governor who worked frequently with Republicans in Virginia; he has stressed throughout his career that he cares about ideas that work, not ideas that originate on his side of the aisle. But for all this resonance with Obama and his story, the speech was underwhelming. It lacked a unifying theme and any rhetorical flourish or rhythm.

And that, ultimately, is why even though Warner likely has the same presidential ambitions as Obama, he would likely be a very different national leader. Obama leads through the sheer force of his personality. Warner has built his immense popularity in Virginia through being an extremely able technocrat. He’s effective, not sexy.

Perhaps Warner was doomed from the start. He had the hardest task at the convention — deliver the keynote four years after Barack Obama delivered one of most memorable keynotes in recent political history, and on top of that, speak in the shadow of Hillary Clinton.

Brian Schweitzer didn’t seem to share the burden. He had charm to spare. The Montana governor, a rancher with no political experience before running for statewide office, was an endless string of wild hand gestures and goofy facial expressions tied together with a bolo tie. He explained that he chose a Republican as his lieutenant governor because he could get more done working with the other side. The traditionally conservative Montana, he insisted, was not a red state or a blue state. It was one of those United States Barack Obama referenced in his 2004 convention speech. Schweitzer went on to list the things he had achieved in a bipartisan spirit, adding, “That’s the change we brought to Montana. That’s the change Barack Obama will bring to America.”

Schweitzer spoke at length about America’s energy future, and had no shortage of jabs for John McCain and George Bush. But he brandished the knife with a smile and the crowd loved him for it. Members of the media at the Pepsi Center mumbled that Schweitzer should have been the keynote instead of Warner. Had Clinton not followed him with a killer speech, Schweitzer would have been the star of the evening.

Ted Strickland, governor of Ohio, spoke in between the two. Unlike Warner, he was willing to attack McCain and Bush. But he lacked the spunk of Schweitzer. Strickland, a septuagenarian, may be an effective surrogate for Obama but isn’t on the short list of rising Democratic stars who have earned early consideration for 2012 and 2016. Today, American got a peek at Warner and Schweitzer, two men at the top of that list.